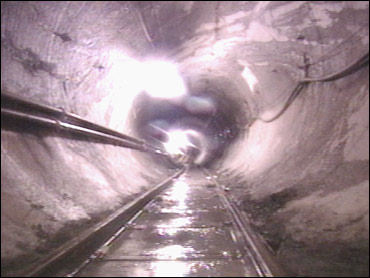 We take so much for granted, like our water -- how the heck does it get into our faucets?

How does a city as big as New York provide enough water not just for drinking, but also for bathing and laundering? New York needs 1.3 billion gallons of water a day.

The answer is that it takes a wonder-of-the-world kind of engineering feat involving two tunnels that are now so old, they're leaking. Nobody knows how long they can last.

And so, an urgent project is under way beneath the city streets: construction of water Tunnel No. 3. It's one of the biggest public works projects on earth - 60 miles long - and when it's finished, it will have taken 50 years to build and cost $6 billion dollars.

As reports, it all starts in upstate New York with a series of mountain reservoirs. There are watershed areas 100 miles north of New York City, with reservoirs at such high elevations that gravity alone carries the water down to the city with enough pressure that no pumps are needed.

But once the water gets to the city, it flows down into those two aging tunnels that have never been repaired or even fully inspected.

The city needs to get Tunnel No. 3 on line before there's trouble.

Work on the new water tunnel has been going on since 1970, but it's far from finished. Mike Greenberg, who used to be in charge of the project, took 60 Minutes on a tour of one section under construction. The ride down, in a steel cage called the Alimak, would take four minutes. For some people, there's a fear of depths similar to a fear of heights.

60 Minutes went down almost 600 feet below ground, the equivalent of a 60-story skyscraper. But Greenberg said the change in air pressure would be imperceptible: "Down here, it's a little more because you're lower. But you don't notice the difference."

Greenberg says the temperature is usually about 50 degrees: "We call it our air conditioner in the summer and our heater in the winter."

OK. It's not too cold, not too hot. And breathing is easy. But there's a lot of water.

"This tunnel is actually a very dry tunnel during excavation," says Greenberg. "There's always some water coming through the rocks. Not to worry."

Water Tunnel No. 3 is so complicated, vast and deep underground, it's been compared - in terms of engineering feats - to the Brooklyn Bridge and the Panama Canal. Officials here, like Mayor Michael Bloomberg, consider completion of the tunnel vital to the city's future. "You have to pray that we get a third tunnel before anything bad happens," says Bloomberg.

60 Minutes met Bloomberg in one of the new tunnel's valve chambers – built a mere 25 stories below ground to withstand a nuclear blast. It's designed to give water Tunnel No. 3 a flexibility the old tunnels don't have.

"As I understand it, this will provide a way to shut off one section, and repair it and examine it," says Stahl.

"Right," says Bloomberg. "The valves to turn off are here. In the old tunnels, they put the valves down in the tunnel so you couldn't get to them. … You can walk around them. You can work; you can close it off at both ends."

There's never been any maintenance on the two existing tunnels because they haven't been able to close the valves. Why?

"Because they're afraid that if you closed them, what would happen if you couldn't re-open it? Supposing a valve froze closed? You couldn't get it open again," says Bloomberg. "That's one of the fears." Sixteen years ago, Harry Reasoner did a story on 60 Minutes called "New York is Falling Apart," in which city engineer Paul Donnellan leveled with Reasoner about the condition of the old valves, which are the ones still in use today.

It turned out the metal used to make these valves had a fatal flaw.

"All of the critical equipment is made out of this material," said Donnellan. "And if it's under stress, it goes through a process called stress-corrosion cracking. It could give you a catastrophic failure."

Have studies been done of the possibility of something catastrophic happening? "If a tunnel were to collapse, first answer is, there's no easy answer to what you would do to provide water for everybody in this city," says Bloomberg.

The only thing to do is plow ahead with Tunnel No. 3. These days, the work never stops. At dawn, when the graveyard shift heads out, the day shift is reporting for work.

The miners building Tunnel No. 3, and all tunnels in New York, call themselves "sandhogs." They start and end their workday in a place called the "hoghouse," where they can grab a bite, change clothes, and clean up at the end of their shift.

Every sandhog is a jack of all trades: They're all carpenters, mechanics, electricians, and of course, miners.

In the tunnel, the work can be claustrophobic, dusty and so noisy that a lot of the men have hearing loss. They're supposed to wear earplugs, but often they don't. Thousands of sandhogs have worked on Tunnel No. 3. Most are either Irish-American or from the West Indies. It's been that way for generations.

"Pretty much all the sandhogs down here have their father in the business or something like that," says one miner, whose father and grandfather were sandhogs. "None of their fathers wanted their sons in it. My old man never wanted me in it. But once it gets you, once it gets in your blood, there's no other job like it."

But it's more than just love; it's also money. Most sandhogs make six figures, though it's something they don't like to talk about.

Ryan McGinnty is a college graduate who gave up a white-collar job to work in the tunnel. "I worked in an office, 60 hours a week, no money," he says. "I don't know. And then I come down here, and I like the people. It's a different world. … Good guys."

When they began building Tunnel No. 3, the sandhogs still mined the way they had for centuries, with explosives, or as the men call it, "drill and blast." But now, they have a powerful ally, a massive tunnel-boring machine nicknamed "the mole."

Men are shown fitting the face of "the mole" with hardened steel wheels that will grind away at the bedrock and reduce it to just pebbles and dust, better known as muck. The muck is then transported by conveyor belt to railcars and then dumped onto other belts that lift it out of the tunnel. The mole weighs 300 tons.

How did they get the machine down there? "The machine was working somewhere in, I believe, it was working in Norway," says Greenberg. "They took it apart, shipped it across the ocean. It arrived at our site. And then at our site, they refurbished it."

"They take it down in pieces, obviously, and then you build it down in the tunnel?" asks Stahl.

The high-tech mole works faster, and with more precision, than the sandhogs used to with explosives. The machine carves a perfectly round tunnel through the bedrock. "It looks as good as a concrete-lined tunnel," says Greenberg.

And "the mole" has dramatically speeded up the whole process. "This particular tunnel has been averaging close to about 100 feet a day," says Greenberg. "That's almost twice as much as years ago with the drill and blast. It's also a lot safer."

"This is a lot safer," says Greenberg. "Because you don't have as many men working with the drills and the blasting as you did before."

"The more fractured rock you have, the more dangerous the area is," says Eamonn O'Donnell. He and his brother, Jim, followed their father into the tunnel more than 25 years ago.

"When we started, there were people that died every year," says Jim O'Donnell. In those days, there was a cruel arithmetic: 23 men died, one for every mile of tunnel. But there hasn't been a fatality since 1997, and "the mole" deserves most of the credit. And yet, in the weeks before our visit, one sandhog severed a thumb; another was blinded in one eye.

"People do lose appendages, you know, because they just can't be aware of everything that's moving at any given time," says Jim O'Donnell.

What about lung disease?

"Everyone gets lung disease," says Jim O'Donnell. "I mean, you're going into an environment where dust is a byproduct of our production. … If I was to take an educated guess, I would assume we are doing damage every day we're down there."

So far, half the tunnel has been excavated, and a 13-mile stretch is already providing water to the Bronx and Upper Manhattan. The section that we were in will eventually bring water to lower Manhattan, once it meets up with the section under Central Park.

"The tunnel going in that direction will eventually meet an existing place where it's ready to be connected," says Greenberg.

How does he know? "Because the guys who do the surveying do very well," says Greenberg. "The Brooklyn/Queens Tunnel met. It was five miles and we missed by about half an inch, quarter of an inch, in fact. It was less than half an inch."

To save time, the sandhogs often end up eating their lunch right in the tunnel. And we joined them.

"I notice there aren't any female sandhogs," says Stahl, who was the only woman there.

"This is not a place for the average woman, you know," says one sandhog. They say that some women tried it out, but were unsuccessful.

"There's a lot of guys who would never do this occupation, either," says one sandhog. There's guys that have came in, got a job, got down in a cage, went in, worked a week, and quit. Said they'll never come back. So it's not so much a male and female thing. It's the nature of the work."

The sandhogs also say it's bad luck to have a woman in the tunnel.

With good luck, the whole tunnel will be completed by 2020. But when the work began back in 1970, the prediction was very different.

"The project was supposed to take, I believe, about 15 to 20 years to complete," says Greenberg. "All of the stages."

"And we're not even anywhere near to being finished with it?" asks Stahl.

"Well, a lot of things have happened since then," says Greenberg.

Some of the things that happened, like the city facing bankruptcy in the mid '70s, slowed the tunnel's progress. But it's on the fast track now, and yet most New Yorkers who walk above it every day don't even know it exists.

"I know other construction workers, and they always talk with such pride about the skyscraper they put up, or they worked on the bridge," says Stahl. "You guys can never do that. I mean, you can't point to what you've done."

"When we're done, you know, manhole will cover over the shaft, and no one will ever know how that water got to their faucet," says Jim O'Donnell.

"We are the few people that understand the suffering and the loss of life that make it happen. And you do have a sense of pride about that."

The robots of Boston Dynamics