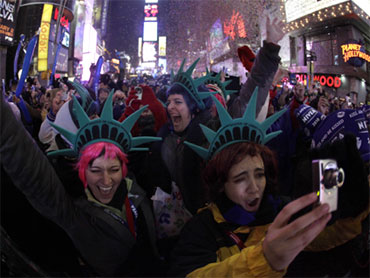 In what may be the biggest party on the planet, more than a million people are expected to ring in the New Year in Times Square in New York City.

While people from all over the world celebrate the New Year beneath Times Square's Swarovski crystal ball, security officials will be working furiously behind the scene to keep them safe as fears of domestic terrorism grow, reports CBS News National Security Analyst Juan Zarate.

"When you get this number of people together, obviously, we're concerned about a possible terrorist event," New York City Police Commissioner Raymond Kelly said on the CBS' "Early Show." "Not only do we have a major event in Times Square, we have others throughout the city. Significant numbers of people throughout the city will have to be policed. As we learned this past year, New York is always going to be a target for terrorists."

Last May, a homegrown terrorist tried to blow up an SUV in the heart of Times Square. Faisal Shahzad's Nissan Pathfinder was rigged to explode and kill hundreds, but two street vendors noticed the device and alerted authorities.

New York is not the only target. A recent plot failed at a holiday tree lighting ceremony in Portland last month. Mohamed Osman Mohamud, 19, was actually caught in an F.B.I. sting operation when he thought he was detonating a car bomb.

The trick for U.S. law enforcement and intelligence officials is to pick the needles out of the haystack and to determine who is going to actually act out.

"(Shahzad) wasn't on anybody's radar screen," Kelly said. "This is the type of thing that concerns us. We're doing everything we reasonably can do to protect the city but there's a lot of unknowns out there."

The snow in Times Square has been cleared away, so the New York City Police Department will have to go all out tonight to protect a massive crowd against potential threats. Thousands of uniformed and plain clothes officers will patrol the city, on the lookout for trouble.

Alcohol and backpacks are being banned in Times Square. There will be about 65 pens for holding the million or so revelers, each of which will have entry points to screen entrants for explosives, Kelly said. In general, the NYPD is not messing around, and will aggressively pursue any untoward behavior.

Kelly said, "A warning if you have any designs on being goofy: check them at the door because you are not going to have the opportunity."