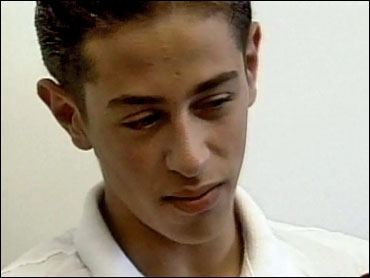 The parents of a New York teen named Osama have sued the school system, claiming their son was constantly harassed by teachers while school officials did nothing.

"This one time in gym I was sitting and it was the beginning of the semester and he said, 'Where's Osama?' and I said, 'Right here.' And he goes, 'I thought you'd be in back of a cave somewhere,'" Osama, now 16, said of an incident two years ago with a teacher at Tottenville High School in Staten Island.

Osama, who prefers to go by "Sam" at his new school in Brooklyn, said the tormenting continued for the next two years.

Osama said the students at his school did not participate in the tormenting. He said they often sympathized with him over the treatment he was receiving from his teachers, Kirtzman reported.

Meanwhile, school officials and teachers did little or nothing to stop the ostracism, Osama's parents said.

"The students were more understanding than the teachers. The teachers are the ones who called him names — bin Laden, terrorist," Osama's mother, Suad Abuhasna, told Kirtzman. "One of the teachers told him not to bother to come to class because no matter what he did he's not gonna pass."

On Monday, Osama's parents announced they would sue the Board of Education for violating their son's civil rights.

The suit notes that after a fight with two students, an assistant principal told Abuhasna that she should enroll Osama in an Islamic school, the New York Post reported.

Also included in the suit is Osama's July 2006 suicide attempt that started when he tried to cut his wrists with a broken CD. When his mother noticed she called a psychiatrist. As she called, Osama tied a cord around his neck and threatened to kill himself, the Post reported.

"It's not only terrible to see your baby going through this," his mother told the newspaper. "It's also the guilt you feel because I gave him that name and I chose that school."

"It's an outrage. Those teachers should have been suspended right away, but nothing happened," the family's lawyer, Omar T. Mohammedi, told Kirtzman.

The Department of Education was reluctant to comment, but a spokesman said: "We take these things very seriously. Our policies do not tolerate bias or bullying. ... We want everyone to feel welcome in our schools."

Osama now goes to a school with a special program for traumatized children. He said he is doing better and that when he turns 18, he wants to revert back to his given name, Kirtzman reported.