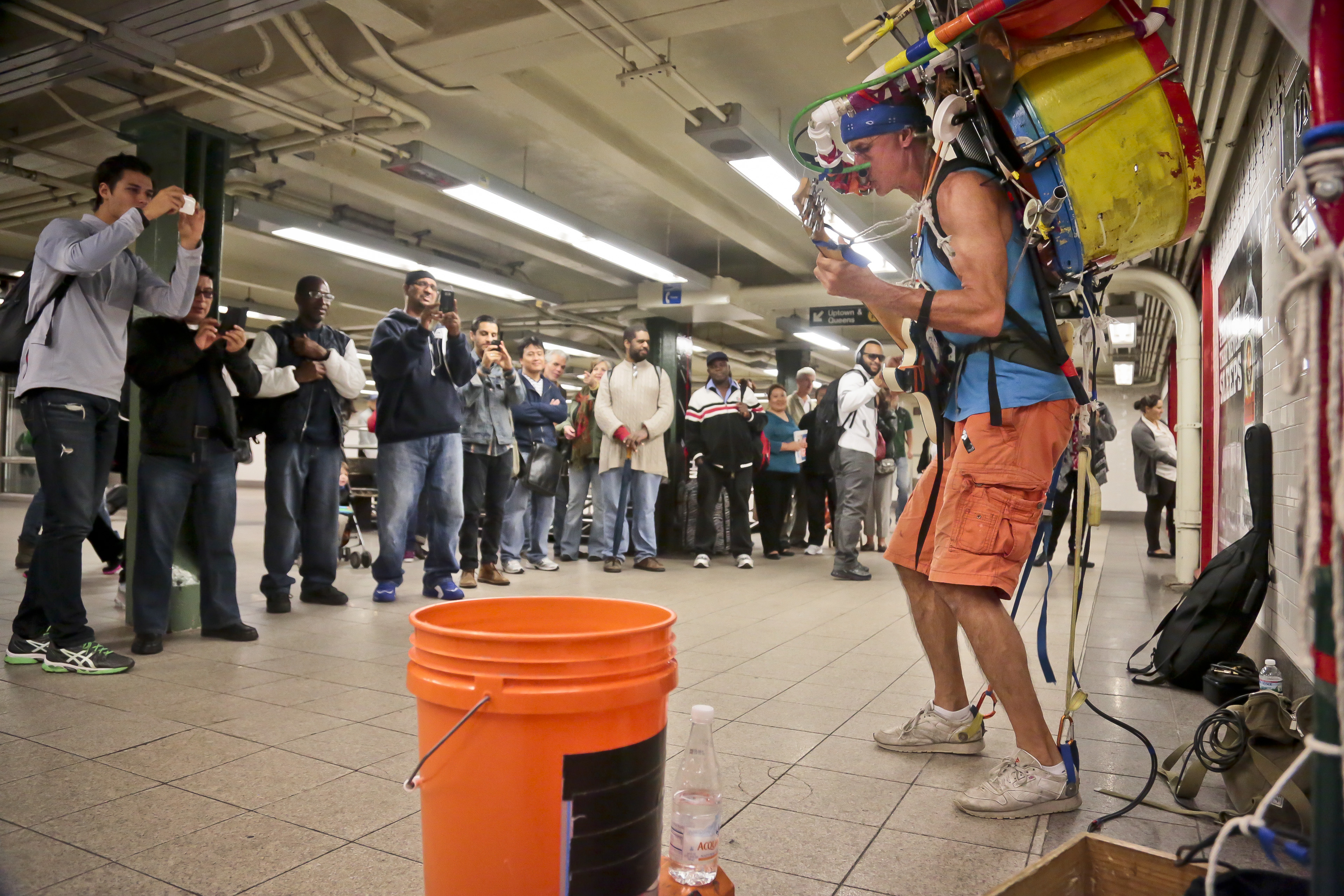 NEW YORK To many, the real soundtrack of New York City plays out well below the street cacophony of rumbling traffic and honking horns, in the subways, where screeching trains combine with the drumming, strumming and singing of hundreds of performers.

They are known as buskers, and they have one of the toughest gigs in show business, trying to get some attention and hopefully some tips from more than 5 million daily commuters who are famous for their get-out-of-my-face focus and sharp elbows.

"You might have a bad day, but just coming out and hearing nice music, it puts people in a more relaxed mood," says Roland Richards, 57, a Trinidad and Tobago-born steel drum player who has performed in city subways since 1987.

Performers trying to eke out a living beneath the stages of Carnegie Hall, Broadway and Madison Square Garden are as diverse as the city itself -there are bucket drummers, Andean wind-pipe blowers, one-man-bands, Chinese string lute players and more. They rely on the ebb and flow of strangers' generosity - but are especially active now, as the lucrative holiday season approaches and tourists flood the city.

Because such performances are protected speech under the Constitution, there is no permit required to perform underground. But the Metropolitan Transit Authority tries to bring some order to it all by holding annual auditions to allot prime station spots, on a schedule, to about 350 different artists.

And the city has some strict ground rules: Putting out a hat for tips is OK, begging is not. No disrupting service. No performing in the subway cars. And no amplifiers on the platforms.

So how much can buskers make? While hard statistics are elusive, some performers who are aggressive about staking out prime spots and selling CDs of their music can make more than just pocket change.

In her 1995 book, "Underground Harmonies," Susie Tanenbaum surveyed musicians on a range of issues regarding subway performing - including their motivation to play. Less than half listed money as a prime motivation.

"One of them told me: I can rehearse and get paid," she says of the business model.

Richards, the steel drum player, was hesitant to disclose too many specifics about his income (on his worst day ever, he said he saw $10, his best, $1,500) but insisted there were some keys to making more: Study the schedules of the sports teams and pick your spots accordingly, know which tourist spots to visit during Christmas and put in at least five hours a day to maximize your earnings potential.

William Chavis, an a cappella singer with a doo-wop group called Select Blend, said the seven members of his crew split their earnings at the end of the day - a good day can net about $200 per person - but better money is made when their exposure underground leads to booking gigs at clubs and private parties.

"We all pay our rent this way, our child support, this is how we eat," the 47-year-old Chavis said.

The exposure can lead to bigger things. Larry Wright, a well-known bucket drummer, performed in Mariah Carey's 1990 "Someday" video, and Harlem native Alice Tan Ridley, mother of "Precious" actress Gabourey Sidibe, made it deep into NBC's "America's Got Talent" after about 20 years singing gospel in the subways.

But the job is not without its hassles - sticky, hot weather in the summer, frigid temperatures in the winter, stingy passers-by and uninformed police officers.

But to many performers, the biggest frustration is the monotony of performing the same 15 songs over and over again.

"You're dragging, like, 'Oh God, we've got to do this again?'" Chavis says. "But once you start up you hear the harmony, the way the music's going and you feel the way people are receiving you ... it's nice, man."