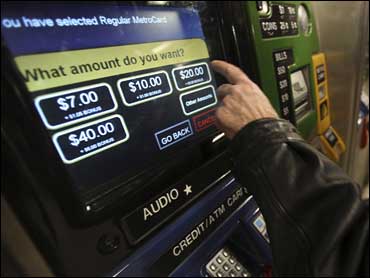 Transit officials facing a $1.2 billion budget gap voted Wednesday for sweeping fare hikes and drastic service cuts that will boost the cost of a New York City subway ride by 25 percent to $2.50.

By two 12-1 votes, the Metropolitan Transportation Authority adopted a measure on fare hikes and another on service cuts, but only after some board members angrily denounced state lawmakers and Gov. David Paterson for failing to bail out the financially troubled agency.

Inside the board room, public transit advocates held up signs that said, "Gov. Paterson, Rescue Transit!" Elsewhere in the city, protesters organized a "call-a-thon" at Manhattan's busy Union Square for angry riders to phone state lawmakers.

In Albany, lawmakers were still trying to work out a deal to soften the blow for the 8.5 million commuters who use the MTA's bus, subway and rail lines on an average weekday. Legislation to impose a payroll tax in the greater New York City area and establish tolls over East River bridges has run into opposition in the capitol, especially among lawmakers from the city's outer boroughs.

Under the measures adopted by the MTA board Wednesday, the base subway and bus fare will rise from $2 to $2.50 and a 30-day MetroCard will cost $103, up from $81. Monthly and single-ride fares on the Long Island Rail Road and Metro-North will also rise an average of 23 percent.

The board also approved service cuts that include the elimination of some bus and subway routes. About 1,100 transit workers will be laid off. The layoffs amount to less than 2 percent of the agency's 69,000-strong work force, but more cuts are expected.

"When you see what's going to happen to your commuting costs, you should call your state legislators and say, 'I'm mad as hell, and I'm not going to take it anymore,"' he said Tuesday, invoking the famous line from the 1976 film "Network."

Bloomberg was in Albany on Wednesday to lobby for education funding but was expected to talk about transit issues.

Under the bailout plan stalled in Albany, transit riders, motorists and businesses would share the pain. Fares would rise 8 percent on average, drivers would pay to use the now-free East River and Harlem River bridges, and businesses in the MTA's 12-county region would be charged a payroll tax.

MTA officials blamed the authority's fiscal woes on the economic downturn. They said ridership is down and revenue from taxes on real estate transactions have fallen steeply. Through mid-March, the authority received $97 million in real estate taxes, $210 million less than it took in during the same period last year.

In a side note to the agency's budget woes, MTA board member Nancy Shevell came under fire from a New York City councilman for missing Monday's vote.

Shevell, who has been dating Paul McCartney, skipped the meeting Monday to attend a gala film opening in London with the ex-Beatle. She was present on Wednesday and voted for the fare increases and service cuts.

She is "someone who does not belong on the MTA board," said Councilman John Liu, chairman of the council's Transportation Committee.