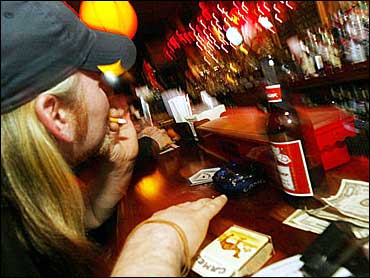 In a smoke-choked Manhattan tavern, Cynthia Candiotti asked a neighbor for a light and took a deep drag on her cigarette, savoring a last barstool puff before the city outlawed smoking in bars and nightclubs.

For Candiotti, 26, the ban is a double whammy: "I can't tell you how many dates with cute guys I've gotten by looking into his eyes while he lights me up. That's as good as smoking."

With fear, loathing and lament, the city of Frank Sinatra, Humphrey Bogart and Philip Morris USA was ushering in the smoke-free age Sunday, one tick after midnight.

Goodbye to the cloying smell of cloves. The wispy white rings that settle into a layer of haze at bars, pubs and nightclubs. The smoker's hack and smelly clothes after a night out, whether you smoked or not. The phone number written on a matchbook cover.

"First they cleaned up Times Square, then they said you couldn't dance in bars or drink a beer in the park. Now you can't even smoke when you go out on the town," said Willie Martinez, 37, who sat, chain-smoking, in an East Village bar. "This is like no-fun city."

"There's one word for this: Ridiculous. Stalinesque. Brutal," interrupted Elliot Kovner, 48, as he added a few choice vulgarities.

Mayor Michael Bloomberg, a former smoker himself, pushed through the ban with a zeal that angered smokers and even some nonsmokers. He stood firm even when an incensed smoker wearing a Superman suit showed up at City Hall carrying a 12-foot-long ersatz cigarette and a sign threatening him.

Health issues are a priority for Bloomberg, a billionaire who once donated $100 million to Johns Hopkins University.

"Fundamentally, people just don't want the guy next to them smoking," Bloomberg said. "People will adjust very quickly and a lot of lives will be saved."

The ban covers all workplaces, including bars, small restaurants, bingo parlors and other venues not covered by the city's previous smoking law. Owners of establishments could be fined $400 for allowing smoking and eventually could have their business licenses suspended.

A state anti-smoking law passed Wednesday is even tougher, closing a city loophole that granted an exemption for businesses that provide enclosed smoking rooms. That law takes effect this summer.

The bans have led to fears that bars will go out of business and rumors that secret "smoke-easies" will pop up — but of course, New Yorkers can be given to exaggeration.

Proprietors in California complained when a similar rule was enacted four years ago, but business did not drop significantly and polls showed most patrons backed the ban.

About 400 communities nationwide have adopted smoking bans in restaurants, according to the American Nonsmokers' Rights Foundation.

But none has New York's history of smoking, from the smoke-filled back rooms of Tammany Hall and the old neon cigarette signs of Times Square to the "loosie" — a single cigarette sold in bodegas for as much as $1 to customers who can't afford a $7 pack. (City and state taxes have lifted cigarette prices to among the nation's highest.)

Until the 1920s, 30 percent of all cigarettes produced in North America were manufactured in the New York metropolitan area.

Philip Morris, long headquartered in midtown Manhattan, announced a few days after the city ban was approved that it would move to Virginia by 2004. Economic reasons, the company said.

"A ban might work in California," said Eddie Dean, who owns a club called Discotheque and a bar called Tiki Lounge. "New Yorkers are defined as a different kind of person. It's a gruffer place. It's less healthy. People are a little more aggressive. I just can't see them tolerating it."

Back at the Orange Bear in the Tribeca section of Manhattan, Cynthia Candiotti's face was obscured behind a cloud of smoke.

"Smoking and boys have sort of always gone together," she said, considering her cigarette. "Smoking, I'll probably quit. Boys, that's a whole other matter."