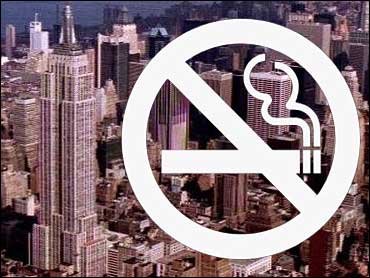 Eleven weeks after the city snuffed out smoking in bars and restaurants, few people are lighting up inside. Instead, many smokers have taken the party to the street, annoying neighbors with noise, litter and clouds of smoke.

On Manhattan's Lower East Side, the sidewalks that years ago were lined with sleeping drunks are now clogged with packs of smokers who flock to the trendy neighborhood bars that popped up after the area got a facelift.

At night, Jen Davis is forced to walk her two dogs down the middle of Ludlow Street, where apartments are sandwiched above and between dance clubs and other nightspots.

"It's annoying because there's just tons of people out and you can't get through the sidewalks, and it's loud," Davis said. "There's like cigarette butts everywhere — it's a mess."

Nearby along Essex Street, frustrated neighbors have been known to dump water on noisy smokers outside bars below.

Bar owners say smokers rarely light up inside now, and are generally agreeable when told to take it outdoors. But one nightclub bouncer was stabbed to death when he tried to enforce the ban two weeks after it began, police said.

City health department officials said they issued 57 smoking ban violations from May 1, when they began issuing citations, until May 23, the latest date figures are available. The ban went into effect March 30 but allowed a grace period for businesses to learn the law.

Most citations related to a lack of no-smoking signs. The penalties — issued to business owners, not smokers — range from $200 to more than $1,000 for multiple offenses.

"It prevents the flow of people on the sidewalk and there's clouds of smoke — you can't get into the bar without breathing secondhand smoke," Benn said.

Joseph Maritato, co-owner of The Whiskey Ward on the Lower East Side, said the smoking ban has cost him in various ways: People linger outside after they smoke, and therefore don't buy as many drinks. And customers who used to come for happy hour now head straight home to New Jersey bars.

He has laid off two bartenders and said business is down 30 percent.

Maritato and his neighbors predict the problems will get worse through the summer, as people flock outside and the noise wafts through open apartment windows.

In another bar-heavy neighborhood uptown, where the locals also complain of impassable sidewalks, Murphy's Bar and Restaurant owner Tony Meegan said his staff has to keep an eye out for customers who walk outside with their drinks, or try to skip out on their tabs. Workers also sweep the butts and spray down the sidewalks more frequently.

Non-smokers say they welcome the smoking ban when they walk into a bar now — but hate the outdoor result.

"It dirties up the streets of Manhattan," said Barbara Weiss, as she walked along a Second Avenue block lined with bars, restaurants and butts.