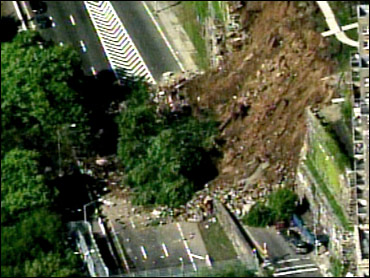 Amy Allison, who lives in the apartment building closest to the wall collapse, said she was at home when she heard a "huge crash."

"I looked out my window, and there was a huge landslide starting to happen," she said. "I saw all of a wall of dirt just tumbling onto the highway."

CBS' Drew Levinson reports the collapse happened just after 4 p.m., as thousands of motorists were making the commute home. The traffic backup was miles long, and motorists were resigned to the delay. It could take days to clean up this mess and the investigation will no doubt take longer to find out why the wall came tumbling down.

Firefighters removed debris and tree branches from the parkway's northbound lanes as residents from the neighborhood near Riverside Drive and 181st Street gathered to watch.

Heavy moving equipment was being sent to the scene; emergency personnel were expected to first search for people who could have been trapped, Office of Emergency Management spokesman Andrew Troisi said.

Police helicopters were used to carry firefighters and other emergency workers to the collapse site. The six-lane parkway was closed in both directions in the area.

Neighborhood residents gathered along other parts of the retaining wall to see what happened. Several described the wall as shoddy and old and said they had complained about it.

Sarah Morgridge, who works for local Councilman Robert Jackson, said workers had been trying to reinforce the wall recently.

"There was a major corrective action for over the last six months," she said. "This is definitely not a case of neglect."

The Henry Hudson Parkway, built in the 1930s, runs along Manhattan's West Side beginning at 72nd Street and travels through the Bronx to the Westchester County line. The Manhattan portion of the highway was closed during the 1970s because it was in disrepair, but eventually was restored and reopened, according to the Encyclopedia of the City of New York.