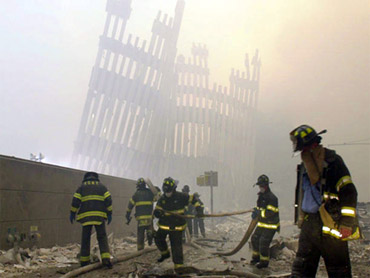 Should a manmade disaster like 9/11 or a natural one strike New York, the city would be in much better position to respond than it was on Sept. 11, 2001, due to the lessons it learned that day, asserts its fire commissioner.

Sal Cassano told "Early Show on Saturday Morning" co-anchor Chris Wragge his department has made "a tremendous amount of changes. You know, after September 11, when you lose 343 members (as the department did at Ground Zero), you certainly look at the way you operate and the changes you need to make, and we have changed. We've decentralized a lot of our resources. We've trained thousands of firefighters in different duties: haz-mat (hazardous materials) duties, rescue and collapse duties.

"But the biggest change we saw is in so many young firefighters coming on the job, young men and women, who knew exactly what happened to this department and knew their role would be changed from fighting fires to being involved in terrorist events, natural and man-made disasters. And it's a tribute to them coming on this department after Sept. 11th, knowing what happened to the members, the 343 members who made the supreme sacrifice."

"We have done a tremendous amount of preparedness. After Sept. 11, we started ... a counterterrorism and disaster preparedness center that coordinates hundreds of drills a year -- interagency, intra-agency, interstate -- to prepare us for possible terrorist attacks, you know, manmade disasters, natural disasters. Every firefighter is given haz-mat training, terrorism training, medical emergency training. Like I said: We used to fight fires 40 years ago, when I came on, but now we're prepared for any event we face."

Cassano said communication between the fire and police departments, which was cited as being vey lax on 2001, is "much better. We have interoperable radios. We have a procedure in place where, if there's a second alarm that comes in, we send a battalion chief up in the air in a police helicopter, where they can converse with the incident commander on the ground. So, now we have a five-sided view of a fire or collapse or whatever emergency we're facing: four sides, and the aerial view. That started shortly after Sept. 11."

His department is "absolutely more prepared, better equipped, better trained than we have ever been before," Cassano said, "and I'm extremely confident that we would be able to handle another event, in any proportion. We hope that doesn't happen, but in the last nine years, we've trained tremendously with different agencies, and you saw what happened in Times Square on May 1 (a failed car bombing), with the cooperation between the NYPD (New York Police Department) and FDNY, prevented a major disaster."