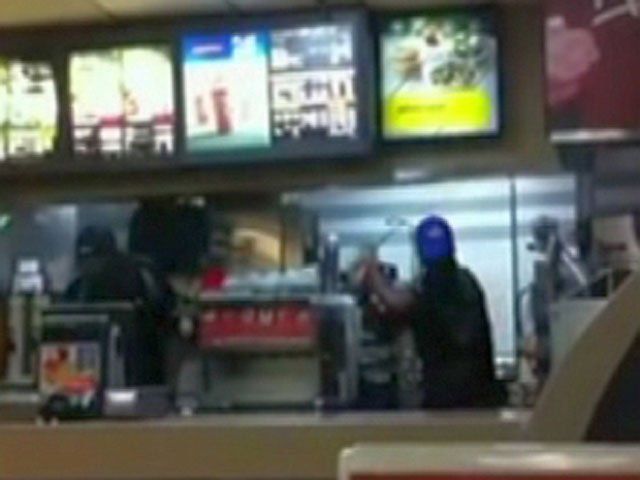 (CBS/WCBS/AP) NEW YORK - A McDonald's cashier arrested for beating two irate female customers with a metal rod claims he was only acting in self-defense.

Rayon McIntosh was arrested Oct. 13 after a vicious fight inside a McDonald's in New York City's Greenwich Village neighborhood. He was charged with two counts of felony assault and criminal possession of a weapon.

According to CBS station WCBS, the fight apparently started after McIntosh questioned the validity of a $50 bill given to him by the two female customers. One of the women then reportedly slapped the cashier.

Video of the incident, recorded by a customer, shows two women vaulting a counter to attack McIntosh after the dispute.

McIntosh grabbed a metal bar and fought back with brutal force, continuing to deliver crushing blows even after the women were incapacitated on the floor.

One female customer had a fractured skull that required surgery, as well as a broken arm. The other has a deep laceration.

McIntosh told the New York Daily News in a jailhouse interview published Saturday that he acted to protect himself.

He says the women came in angry, and he was just trying to keep things calm when they "attacked for no reason."

WCBS reports McIntosh previously served more than a decade in prison after fatally shooting a high school classmate in 2000. He was being held on $40,000 bail in the beating case.

The female customers were charged as well with menacing, disorderly conduct and trespassing.