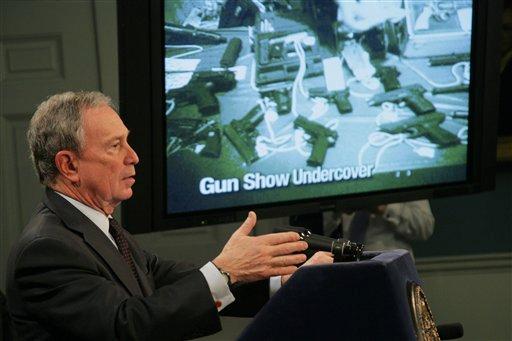 "After Tucson, you would think that people, particularly at a gun show in Arizona, would have been much more careful in enforcing the law," he said. "That unfortunately in some cases wasn't the case."

Bloomberg has authorized similar sting operations around the country as part of a push for tougher federal laws to help keep guns off the streets of New York.

But in the sensitive aftermath of the shooting Jan. 8 that killed six people and critically wounded Rep. Gabrielle Giffords, the mayor was questioned about the time and place of his hidden-camera investigation, a $100,000 operation conducted almost clear across the country.

"Let me get this straight: From New York City, they are going to send people to Arizona to look into this?" said state Sen. Ron Gould, a Republican. "They might take a look a little closer to home if they are concerned about guns getting in their state."

The operators of the Phoenix gun show where the investigators made their buys on Jan. 23 issued a statement Monday saying all exhibitors at its shows are required to follow state and federal gun laws.

"Mayor Bloomberg and his 'task force' have no legal authority in the state of Arizona, or in any other place in America except New York City," said the statement from the Crossroads of the West Gun Shows. "These forays into America's heartland committing blatant acts to entrap otherwise innocent gun owners is an unlawful scheme that is created by Bloomberg's task force."

While many sellers at gun shows are not required under federal law to perform background checks, it is illegal for them to sell a weapon if they have reason to believe the buyer wouldn't be able to pass one, the mayor said.

The mayor said that without mandatory background checks, gun shows had become "magnets for criminals," and called for federal action to close what he said were dangerous loopholes in the law. Last week, Sen. Frank Lautenberg, D-N.J., proposed federal legislation that would require background checks for all firearm purchases at gun shows.

Jim Cavanaugh, a retired agent for the Bureau of Alcohol, Tobacco, Firearms and Explosives, where he was in charge of the Nashville division, said he didn't believe the sales described by the mayor were, in fact, illegal.

"It's not a prosecutable offense" because the purchasers were not truly felons, minors or drug abusers and because they didn't tell the sellers definitively that they were, Cavanaugh said. As for Bloomberg, he said, "ATF has asked him not to do it and to please coordinate with ATF if he thinks a violation is occurring."

In 2007, the U.S. Justice Department warned in a letter to City Hall that such civilian operations risk "legal liabilities" and can "unintentionally interrupt or jeopardize ongoing criminal investigations."

The mayor conceded that most illegal guns in New York City are coming from states along the East Coast, but said the rampage in Tucson would bring national attention to the investigation.

The city-hired investigators also obtained a Glock gun and 33-round extended magazine similar to those authorities have said Jared Loughner used to open fire as Giffords met with constituents outside a supermarket.

Investigators have said Loughner legally purchased his ammunition the morning of the attack. He had cleared a federal background check and legally bought a Glock 19 at a big-box sporting goods store two months earlier.

Bloomberg's office said all the investigators were Arizona residents and broke no laws.

The mayor, who heads a national coalition of mayors advocating stronger gun control, argues that it is necessary to bring his battle across state lines because illegal guns from states with more lenient rules consistently find their way onto New York City's streets.

About 90 percent of the 5,000 guns confiscated by city police last year were from out of state, Police Commissioner Raymond Kelly said.

An almost identical 2009 sting operation targeted seven gun shows in Tennessee, Ohio and Nevada. As a result, organizers of 35 gun shows around the country - including the 1,300-table Big Reno Show in Nevada - have agreed to end all no-background-check sales, Bloomberg said.

In 2006, more city-hired undercover investigators posed as gun buyers making so-called straw purchases in Georgia, Ohio, Pennsylvania, South Carolina and Virginia, with one person filling out the paperwork for another person's gun purchase.

ATF spokesman Drew Wade said Monday that he could not comment on whether the agency was investigating the city's findings.