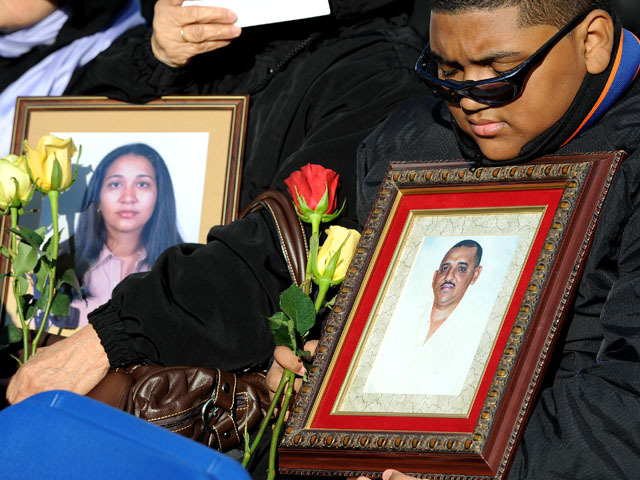 NEW YORK - For a few anguished hours on Nov. 12, 2001, Americans still in shock over the Sept. 11 attacks watched television footage of the blazing wreckage of a jetliner bound for the Dominican Republic that had just crashed in a Queens neighborhood, and wondered: Is it happening again?

It wasn't. By late afternoon, authorities were saying the crash of American Airlines Flight 587 looked like an accident, not terrorism. The country breathed a sigh of relief. The horror and grief lingered longer for the loved ones of the 265 dead, most of them Dominican.

Even after a decade, sadness lives on for people like William Valentine, whose partner and lover of 20 years, Joe Lopes, a flight attendant who died in the crash.

"I don't think an hour goes by," he said, suppressing a sob, "when I'm not thinking of Joe in some way."

Hundreds of people gathered Saturday morning at a seaside memorial on New York's Rockaway peninsula to mark the 10th anniversary of the crash, which killed everyone aboard the aircraft and five people on the ground. The wreck remains the second deadliest aviation accident on U.S. soil.

The ceremony, held on a cool but beautiful fall day, echoed the ones that have been held annually at ground zero where the World Trade Center once stood. At 9:15 a.m., a bell tolled and there was a moment of silence to mark the time the plane went down. The name of each victim was read, often tearfully, by relatives. Some lost several members of their family on the flight, from toddlers to aging patriarchs.

"Ten years have gone by, but as you know all too well, every day in the wake of tragedy is a day of remembrance," said Mayor Michael Bloomberg.

The accident will remain forever linked to Sept. 11 because of its proximity in both time and distance to the disaster at the World Trade Center. Belle Harbor, the suburban beach neighborhood where the plane went down, has been a longtime enclave of police officers, firefighters and financial district workers, and was still holding funerals for its Sept. 11 dead when the accident happened.

The hardest blow, though, came for New York City's large community of immigrants from the Dominican Republic. Flight 587 was bound for Santo Domingo when it went down. In some city neighborhoods, like Manhattan's Washington Heights, it seemed like everyone knew someone aboard the flight.

Parts of Saturday's ceremony were conducted in Spanish, including a reading of verses by the Dominican poet Pedro Mir. A line from his poetry also graces the Flight 587 memorial: "Despues no quiero mas que paz," translated as "Afterward I want only peace."

Investigators ultimately determined that the plane's tail had detached in midair because of stress put on the plane's rudder as the co-pilot tried to steady the aircraft in another jet's turbulent wake. Since then, steering systems for some airliners have been redesigned so pilots can have greater awareness of movements in the tail rudder.

"Before this crash, pilots probably didn't have an understanding that this kind of accident could occur," said Steve Pounian, a lawyer at the law firm Kreindler & Kreindler, which represented the families of 90 crash victims. Well over 250 lawsuits were brought because of the accident. All have since been settled, for undisclosed amounts that Pounian said totaled more than $500 million.

Valentine, 57, decided to skip this year's anniversary ceremony. In an interview Friday, he said he would be gardening instead, planting flowers at his New York City co-op. But his grief remains fresh. He visited the seaside memorial privately a few weeks ago, and it reminded him of a walk he and Lopes took on a beach in San Francisco on their second date, in 1980.

The two men spent the next two decades together, eventually settling in New York City.

Lopes had a master's degree in social work from Columbia University, but preferred flying for a living. He wasn't a regular on Flight 587. That fall, the 46-year-old had been working a trans-Atlantic route to Paris. The flight to the Dominican, Valentine said, was an extra shift on the side. In the slowdown in air travel after the Sept. 11 attacks, Lopes had actually asked to take Nov. 12 as a vacation day, but, fatefully, he was turned down.

After the crash, Valentine took the unusual step of applying for death benefits usually granted to surviving spouses under the state's worker's compensation law. At the time, though, New York didn't recognize same-sex unions. The claim was turned down, and a legal appeal ended in defeat.

It was partly because of stories like that — of longtime partners being denied simple legal rights granted to other committed couples — that New York lawmakers moved to legalize gay marriage this summer.

Valentine's joy over the moment was tempered by the knowledge that, for him, the change had come too late. Seeing all those photographs of other gay men and women celebrating their marriages this summer came with a touch of pain.

But, he added, "I had 21 years with a wonderful man. And who I am today is very much a reflection of who he made me."