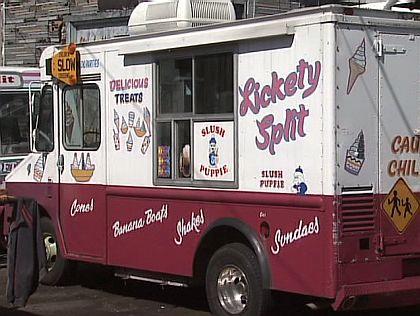 (CBS/WCBS/Reuters) NEW YORK - A New York City ice cream vendor has been sentenced to three-and-a-half years in prison for selling prescription painkillers right out of his Lickety Split truck, alongside frosty treats for kids.

The 30-year-old Staten Island vendor, Louis Scala, was the leader of a $1 million drug-trafficking ring that police busted back in March in an investigation they called "Operation Bad Medicine," in which dozens of people were arrested.

Prosecutors said Scala's sentence was a component of a plea deal. In August, he pleaded guilty to one count of conspiracy and one count of criminal possession of a controlled substance.

"After serving ice cream to the children, Scala would invite the pill customers, typically waiting in their nearby car, to step into his truck to complete their transaction," special narcotics prosecutor Bridget Brennan previously explained to CBS station WCBS.

In court Tuesday, Scala went before Judge Jill Korviser and turned down the opportunity to speak before her ruling. After the hearing, his family refused to comment. Scala's attorney, Patrick Parrota said, "The family just wants to move on."

Scala, and a network of 30 other people were arrested in March for illegally obtaining almost 43,000 oxycodone pills from July 2009 to June 2010, by using a stolen prescription pad from a doctor's office in Manhattan.

His alleged partner in the prescription drug ring, Joseph Zuffalo, has not yet been charges.