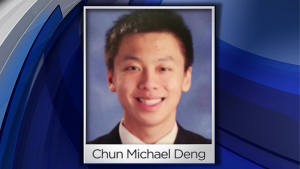 NEW YORK -- Police in Pennsylvania are investigating the death of a New York City college student during a fraternity ritual.

The Monroe County District Attorney's office said in a statement Wednesday that 19-year-old Chun "Michael" Deng was brought to a Wilkes-Barre hospital early Sunday morning in critical condition. Police said Deng was injured at a Tunkhannock Township residence, where about 30 members of the Pi Delta Psi fraternity from Baruch College had traveled for the weekend. The township is in northeastern Pennsylvania, about 30 miles north of Allentown.

Deng. who was a freshman, he died Monday.

Deng, one of four pledges to the fraternity, was allegedly injured early Sunday morning in a ritual in the yard. The nature of the ritual and the injuries it caused him aren't clear. Police didn't immediately return messages left by The Associated Press.

"The preliminary reports indicate that Michael died over the weekend while participating in an unsanctioned fraternity pledging event," the statement said. "Baruch College had no knowledge of this event or that the fraternity was rushing a pledge class. Pi Delta Psi did not request permission nor were they approved by Baruch on this matter."

The school also said that it has a "zero tolerance policy regarding hazing" and that all fraternities and sororities are required to attend an orientation session that includes anti-hazing training, and sign statements that they understand the policies.

"Michael's death is a deeply painful reminder that no individual should ever be put into a position where his or her personal safety is in jeopardy. Our deepest sympathies go out to Michael's family and his friends."