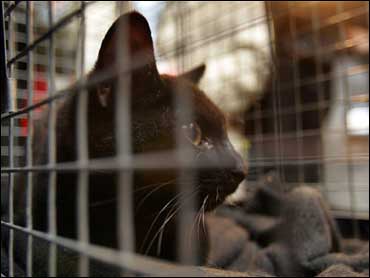 Molly the cat is finally free.

After two weeks stuck behind a brick wall in a 19th century building, the bashful 11-month-old feline was rescued from her plight Friday night by a volunteer who found her wedged in a crawl space between bricks and a piece of sheet metal. At the end of the ordeal, the black cat emerged from the building lying in a metal cage. The look on her face that said, "What's all the fuss about?"

As a crowd of reporters and onlookers jostled for a glance, the 11-month-old black cat appeared docile and unscathed despite her ordeal, which came to a happy end on Friday after a volunteer pulled her to safety from a crawl space.

"I think you'll all agree that she is in great shape," said a proud Peter Myers, a delicatessen owner in the building who kept Molly in his store to catch mice.

Molly's distressed meows _ audible from the sidewalk outside the building _ became international news, and rescuers worked almost around the clock for her safe retrieval.

The activity began after the cat wandered into a narrow space between walls and got lost in the building's complex network of beams and pipes.

Those involved in the rescue effort drilled and hammered out bricks in the cellar of the 157-year-old edifice, trying everything from special cameras to traps to locate her and get her out. Kittens were used as bait to appeal to Molly's maternal side. A pet psychic and self-described "cat therapist" even stopped by to offer a hand.

But in the end, it was good old-fashioned elbow grease that got the job done.

Rescuers drilled a hole in the wall from inside the store, cutting through layers of brick to get to Molly, said Mike Pastore, field director for Animal Care & Control of New York City, a private organization with a city contract to handle lost, injured and unwanted animals.

Animal Care & Control will set up a link on its Web site for people to donate to help with repairs at the deli.

Molly was finally retrieved by Kevin Clifford, a tunnel worker at a project nearby who had been volunteering for the rescue effort.

"I gave what they needed, and lent a hand to it," he said.

"It was twisting and turning, paws were flying everywhere," he said. "It took a little struggle to put her back in a cage."

Molly's first meal? Nibbles of roasted pork, sardines in oil and water, Myers said. Hearty fare, but perhaps not surprising for a feline who spends her time in Myers of Keswick, a deli specializing in meat pies, clotted cream and other British food specialties.

"I'm amazed at how well she looks," Myers said. "She always was a fit cat, otherwise she wouldn't have survived 14 days in that hole."