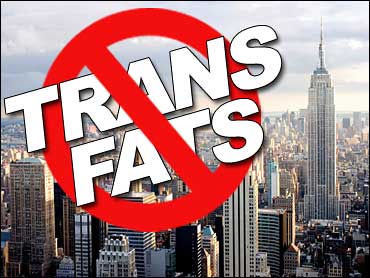 The Board of Health voted Tuesday to make New York the first city in America to ban artificial trans fats at restaurants — from the corner pizzeria to high-end bakeries.

The board, which passed the ban by a unanimous vote, did give restaurants a slight break by relaxing what had been considered a tight deadline for compliance. Restaurants will be barred from using most frying oils containing artificial trans fats by July 1, and will have to eliminate the artificial trans fats from all of its foods by July 1, 2008.

Health Commissioner Thomas Frieden said recently that officials seriously weighed complaints from the restaurant industry, which argued that it was unrealistic to give them six months to replace cooking oils and shortening and 18 months to phase out the ingredients altogether.

Trans fats are believed to be harmful because they contribute to heart disease by raising bad cholesterol and lowering good cholesterol at the same time. Some experts say that makes trans fats worse than saturated fat.

A common form of trans fats is partially-hydrogenated vegetable oil, which is used for frying and baking and also turns up in processed foods like cookies, pizza dough and crackers. Trans fats, which are favored because of their long shelf life, are also found in pre-made blends like pancake and hot chocolate mix.

The FDA estimates the average American eats 4.7 pounds of trans fats each year.

Mayor Michael Bloomberg, who banned smoking in bars and restaurants during his first term, has dismissed cries that New York is crossing a line by trying to legislate diets.

"Nobody wants to take away your french fries and hamburgers - I love those things too," he said recently. "But if you can make them with something that is less damaging to your health, we should do that."

Many food makers have stopped using trans fats on their own, after the U.S. Food and Drug Administration began requiring companies to list trans fat content on labels.

Fast-food restaurants and other major chains are particularly interested in the board's decision on Tuesday because a trans-fat ban wouldn't just involve substituting one ingredient for another. In addition to overhauling recipes, they would have to disrupt nationwide supply operations and try to convince customers that the new french fries and doughnuts will taste just as good as the originals.

McDonald's Corp. has been quietly experimenting with more than a dozen healthier oil blends in some of its U.S. restaurants, but still has not committed to a full switch. At an investor conference last month, CEO Jim Skinner said the company is making "very good progress," at developing an alternative, and vowed to be ready for a New York City ban.

Wendy's International Inc. introduced a zero-trans fat oil in August and Yum Brands Inc.'s KFC and Taco Bell said they too will cut the trans fats from their kitchens.

Chicago is also considering its own trans fat law, which wouldn't ban them outright but would severely restrict the amount that kitchens can use. The measure would apply only to large restaurants, defined as those that make more than $20 million in sales per year.

New York's move to ban trans fats has mostly been applauded by health and medical groups, although the American Heart Association warns that if restaurants aren't given ample time to make the switch, they could end up reverting to ingredients high in saturated fat, like palm oil.

The panel also passed another measure that has made restaurants unhappy: Some that chose to inform customers about calorie content will have to list the information right on the menu. The rule would generally apply to fast-food restaurants and other major chains.