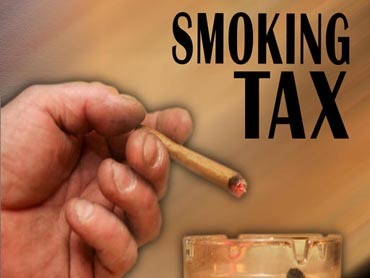 (CBS) New York smokers will have to be a little richer to indulge in a smoky treat come September 1.

According to WCBS-TV, Governor David Paterson just signed a bill from the state legislature that will impose a heavy state tax on already costly New York cigarettes.

Now smokers will have to come up with an additional $5.85 per pack, which means a single pack of cigarettes will cost up to $11. They currently pay $2.75 in "sin tax." In addition, tax on cigars and chewing tobacco will climb from 46 percent of the retail price to 75 percent.

Critics say that in a state where people can easily travel from New Jersey to New York to Connecticut, a higher tax here may encourage smokers to buy their cigarettes elsewhere.

"I think people will find other ways, go out of state and stuff to buy cigarettes," Parkchester Resident Tiffany Barnwell told WCBS-TV.

Or they could decide to kick the habit.

A  "15 percent decrease in teen smoking will result as initiation of this tax, and a 5 percent adult smoking decrease from the tax itself," said Scott Santarella, CEO of the American Lung Association New York.

Paterson said the hike, combined with a plan to collect sales tax on cigarettes sold by Native American tribes, will raise more than $400 million a year which is earmarked for New York City health care initiatives.