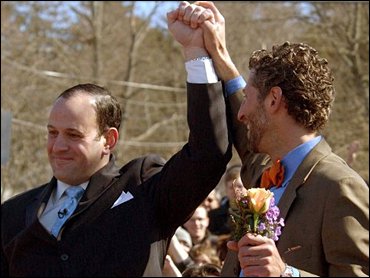 Billiam van Roestenberg and Jeffrey McGowan, both 39, were the first to wed to the cheers of the crowd.

"What we're witnessing in America today is the flowering of the largest civil rights movement the country's had in a generation," Mayor Jason West, 26, said.

The move could make his village 75 miles north of New York City another flash point in the national debate over gay marriage.

"The people who would forbid gays from marrying in this country are those who would have made Rosa Parks sit in the back of the bus."

Twenty-five years ago, the same court upheld gay rights by saying businesses could not arbitrarily discriminate against homosexuals. It was also the first state supreme court in the United States to legalize interracial marriage 56 years ago.

Lockyer has said that he personally believes San Francisco is violating state law, but that the high court should decide the controversy.

Jessie Choper, a constitutional law professor at the Bolt School of Law at the University of California, Berkley told Larry Chiaroni of KCBS-AM the legal issues are clear.

"The California defense of marriage Act identifies a man and a woman for being married," while San Francisco Mayor Gavin Newsom believes "this violates the equal protection guarantee of the California Constitution."

More than 3,400 same-sex couples have been married in San Francisco in the past two weeks, including the first celebrity on Thursday. Former television talk show host Rosie O'Donnell married her longtime girlfriend, taking what she called a proud stand for gay civil rights.

O'Donnell and Kelli Carpenter emerged to the cheers of hundreds, and to the singing of the San Francisco Gay Men's Chorus, reports CBS News Correspondent John Blackstone.

O'Donnell said they were motivated by the president's call for a constitutional amendment to ban gay marriage.

"We were both inspired to come here after the sitting president said the vile and vicious and hateful comments he did on Tuesday," she said on the steps of City Hall.

KCBS-AM's Doug Sovern reports the regional office of the Social Security Administration has been told not to accept any marriage certificates for weddings performed in San Francisco since Feb. 12. Marriage certificates normally are used to prove eligibility for spousal benefits.

"Until the legality of the documents is resolved, Social Security will not accept them," spokeswoman Leslie Walker said, adding that that applies to all couples, gay or straight. Newlyweds can use other forms of identification to show a name change, such as a driver's license.

On Wednesday, opponents of gay marriage asked the California Supreme Court to block San Francisco from issuing any more same-sex marriage licenses and to nullify the thousands of weddings already performed. Two groups previously failed to get the weddings immediately stopped in Superior Court.

The court did not indicate whether it would even hear the case, let alone immediately act to block the city from issuing the licenses. California's justices usually are loathe to take cases until they work their way up through the lower courts, which this case has not done.

Also Thursday, a conservative group called for Lockyer and Newsom to be removed from office. The Sacramento-based Pro-Family Law Center filed a legal action with the attorney general's office calling for their removal for breaching their oaths of office.