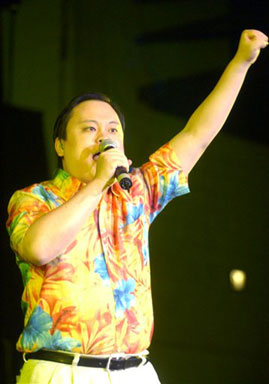 Positioning itself firmly against Pat Buchanan, the New York State branch of the Reform Party endorsed a little-known physicist and college profesor for president Thursday.

"I never knew being so far behind was such an asset," joked John Hagelin, who hopes to wrest the nomination from front-runner Buchanan in the nationwide, mail-in primary that started this week.

Since party founder Ross Perot has decided against running, Hagelin has emerged as the sole challenger to Buchanan for the nomination and $12.6 million in federal election funds.

"It's a referendum on what the character of the Reform Party will be," said Lenora Fulani, a leader of the New York Independence Party, the state affiliate of the national Reform Party. "Pat Buchanan wound up with a narrow and ideological campaign."

Fulani, a left-wing activist, had forged a bizarre political alliance with the socially conservative Buchanan before withdrawing her support. She endorsed Hagelin last month.

Hagelin, 46, is a founder of the Natural Law Party, which grew out of the teachings of Transcendental Meditation leader Maharishi Mahesh Yogi. He holds a doctorate in physics from Harvard University and lives in Fairfield, Iowa, where he is a professor at the Maharishi University of Management.

He advocates preventive health care, the elimination of political action committees and the application of scientific thinking to policy problems.