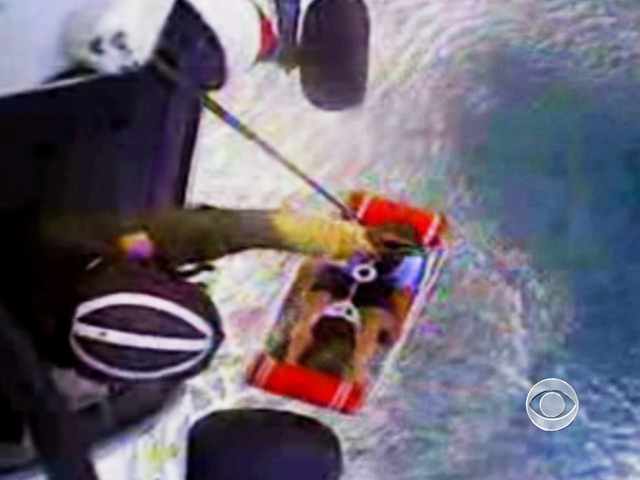 (CBS News) OAKDALE, N.Y. -- The Coast Guard rescued a commercial fisherman Wednesday in the ocean off Long Island. He'd spent 12 hours in the Atlantic after falling off his boat. In all that time, he managed to keep his wits about him and, fortunately, his boots.

John Aldridge is one tough lobsterman. It was three in the morning and he was in the Atlantic Ocean, more than 40 miles offshore.

"A pair of boots, T-shirt and shorts and my knife," Aldridge says, listing the items he had with him.

Asked if there was ever a point at which he thought he was all done, Aldridge replies, "I wouldn't let that thought come into my head. Positive thinking the whole time. Death was not an option."

"I immediately set goals for myself: OK, I'm floating on these boots. I'm above the water, I'm breathing. The water's warm. All right, that's one goal," Aldridge recalls. "Next goal: I got to stay alive until sunrise. If I make it to sunrise, they're going to call the Coast Guard and come looking for me. They'll be able to find me."

Turning over the boots and using them as floats, he made it to a fishing buoy.

What was he thinking when he realized the chopper had seen him?

A call home then touched off a family celebration. His mother joked she'd kill him once for all he'd put her through, knowing what we all do now: John Aldridge doesn't die so easily.