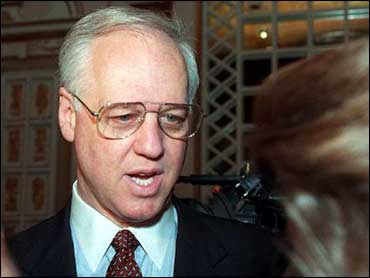 State Comptroller Alan Hevesi publicly apologized Thursday for a "beyond dumb" remark about a fellow Democrat "putting a bullet between the president's eyes."

Hevesi, who holds the position of finacial overseer of New York state, hastily called a mea culpa press conference hours after putting his foot in his mouth at the Queens College commencement.

The Queens College media relations office said it had videotaped the commencement but could not immediately provide a copy of the tape or a transcript.

At the news conference, a contrite Hevesi repeated what he recalled saying in the speech. The comptroller said he was merely trying to convey that Sen. Charles Schumer has strength and courage to stand up to the president.

"I apologize to the president of the United States" as well as to Schumer, said Hevesi. "I am not a person of violence."

"I am apologizing as abjectly as I can. There is no excuse for it. It was beyond dumb."

Hevesi said he hadn't been in touch with the White House but he hoped his apology reached President Bush.

Hevesi, a longtime professor of government and politics at Queens College before becoming comptroller, also referred to his comments as "remarkably stupid" and "incredibly moronic."

"I do speak extemporaneously," he said. "And I've never said anything like this."

"Comptroller Hevesi was trying to make a point. He went way too far and it was inappropriate and wrong," Heller said. "He has apologized to both the senator and the president and we believe that ends the matter."

At least one Republican seized on Hevesi's words.

"Threats against the president are no joke and this incident raises real concerns about Alan Hevesi's fitness to hold public office," comptroller candidate J. Christopher Callaghan said during his acceptance speech at the Republican state convention on Long Island.