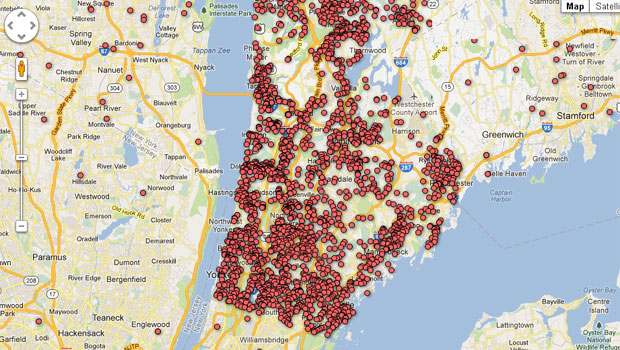 CARMEL, N.Y. Officials in Putnam County have refused a newspaper's request to release the names and addresses of residents with pistol permits — a move an open government advocate calls illegal.

County Clerk Dennis Sant cited concerns about the safety of permit holders with protection orders as among the reasons for turning down a request from the Journal News.

In December, the newspaper published online maps that allow viewers to see the names and addresses of pistol and revolver permit holders in neighboring Westchester and Rockland counties. The newspaper sought the records under the state Freedom of Information Law after the school shooting in Newtown, Conn.

Sant's move was backed by several local elected officials, including County Executive MaryEllen Odell. She called the paper "reckless" and said families would be put at risk if the information was released.

"In Putnam County, I have over 11,000 pistol permit holders, and I refuse to put their lives and their families' lives in danger," Sant told The New York Times. "When these laws were conceived, there was no social media, there was no Google maps."

The Journal News reportedly hired armed guards at one of its offices after receiving numerous "negative" phone calls and emails about the maps.

"I thank God that Putnam County has a clerk with the guts to stand up and draw the line here in Putnam County," Ball said.

Robert Freeman, executive director of the state's Committee on Open Government, said the suburban county outside New York City would be violating state law if it withholds the information. "The name and address of any gun licensee are public," he said.

The newspaper stands by the project.

"We believe the law is clear that this is public information and the residents of Putnam County are entitled to see it," said Journal News President and Publisher Janet Hasson. "We're troubled that county officials have apparently switched their position since we first requested the information."

Freeman said the Journal News could appeal a denial, which would be heard within Putnam County government. If a second denial occurred, the newspaper could ask a judge to decide.

The Journal News, a Gannett Co. newspaper covering three counties in the Hudson Valley and operating the website lohud.com, ran an 1,800-word story headlined, "The gun owner next door: What you don't know about the weapons in your neighborhood."

The story included comments from both sides of the gun rights debate and presented the data as answering the concerns of those who would like to know whether there are guns in their neighborhood.

On Wednesday, The Journal News reported that emergency officials responded to their office Wednesday afternoon after one of their employees opened an envelope in the mail containing a suspicious white powder.

The newspaper said there were no evacuations and the employee underwent decontamination procedures.