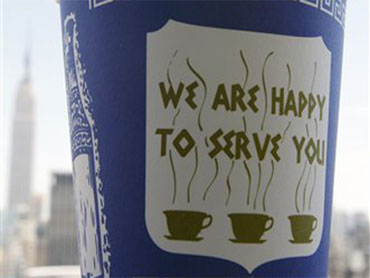 Countless New Yorkers and visitors have warmed their hands on it - a blue, white and gold cardboard cup with an ancient Grecian design, steaming with coffee or tea.

This pop-culture emblem of New York is slowly disappearing. And now the man who created it is gone.

Leslie Buck died on Monday at his home in Glen Cove, Long Island, at age 87. He succumbed to complications from Parkinson's disease, said his son, Robert Buck, who for years worked alongside him at a Connecticut cup-making company.

Starting in the 1960s, the Holocaust survivor from Eastern Europe decorated his creation with Greek urns, images of coffee cups and the phrase "We Are Happy To Serve You" in a font resembling ancient Greek.

The new product, made by the Sherri Cup Co. of Kensington, Conn., was aimed at urban diners owned by Greek immigrants who were, in fact, happy to serve customers sipping from hundreds of millions of the cups over the decades.

The design soon spilled into the streets, used by vendors peddling coffee on chilly days.

Leslie Buck called it the "Anthora" - unable to quite pronounce "amphora" (or urn) in his accented English.

He was born Laszlo Buch in Khust, Czechoslovakia - now part of Ukraine. He survived Auschwitz and Buchenwald, leaving Europe after his parents died in the Holocaust.

In the 1960s, Buck joined Sherri, which by the early 1990s was selling 30 million pieces a year of the cup designed by an artistically untrained immigrant, said Robert Buck.

They became standard props in films set in New York and television shows such as "Law & Order." Imitators followed, adding variations like columns and discus throwers.

Then came Starbucks and other gourmet shops, sipping away at the ordinary American coffee market, "and they had their own fancy cups," said Robert Buck. "And now, it's not as big a thing as it used to be."

The "Anthora" is still around in many New York diners, delis and an occasional food cart, but it's also popping up as nostalgia - in T-shirt images and as ceramic mugs at gift shops.

Solo Cup Co., the Illinois company that took over Sherri, only makes the originals on special order, a representative said.