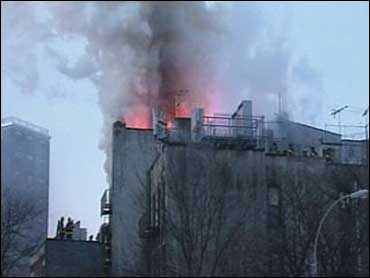 An extension cord sparked a blaze that tore through an apartment building in Manhattan's Chinatown Tuesday, killing two people and sending others leaping from windows to escape the flames, the fire department said.

A 33-year-old woman and a 32-year-old man - both pulled from the second-floor apartment where the blaze started - died. At least 27 others were hurt, including eight firefighters and a woman who jumped from a third-floor window to the ground. Two others apparently jumped from the roof of the burning building to the roof next door.

The five-alarm blaze was so fierce it took 180 firefighters to bring it under control. It started in the back bedroom of a second-floor apartment and quickly spread through the building, causing part of the roof and several floors to collapse and leaving the building uninhabitable, fire officials said.

"There were flames right below us; right underneath our fire escape. It was getting hot so we knew it was urgent to try and climb up to the roof," tenant Annie Ling told CBS station WCBS in New York.

The building's owner had been issued a violation last month for unsafe electrical wiring, Department of Buildings spokeswoman Kate Lindquist said. The owner hadn't notified the agency about whether the violation had been corrected.

"There could be an open violation as to exposed wiring that was issued in January. We cannot yet confirm whether that violation was cured," said Manhattan Borough President Scott Stringer, according to WCBS.

Fire Department Chief of Operations Patrick McNally said the blaze was difficult to control because the building was old, like many in Chinatown. Firefighters had to overcome fierce winds, which gusted up to 30 mph, and temperatures that dropped to 22 degrees overnight.

Three buildings in the neighborhood were evacuated as residents were pulled from their beds by emergency crews banging on doors.

"There was a terrible burning smell," said Ping Wong, who lives next door to the building that burned. "And they told us to get out. I was scared."

A woman in her 30s who lived on the fourth floor of the gutted building said she was awakened by her roommates.

"We could feel the heat coming from the floorboards below," said the woman, who wouldn't give her name because she was afraid of immigration enforcement.

She and her two small children had to climb out a window and down a fire truck ladder to safety.

"There were people screaming and a lot of people with babies. Everyone was just trying to help each other. But it was a little chaotic," tenant Jaqueline Gallow told WCBS.

The Red Cross said 60 families fled the three buildings. It wasn't clear when residents would be able to return. Hundreds took shelter in a nearby community center, where many fell asleep sitting up. Twenty-six adults and six children who lived in the building that burned were eventually moved to Red Cross headquarters for temporary shelter.

Mayor Michael Bloomberg toured the scene in the afternoon, offering condolences to displaced residents and thanking firefighters for their work.

A critically injured man initially taken to New York Downtown Hospital was then moved to the burn unit at Weill Cornell Medical Center, spokeswoman Kathleen O'Keefe said. Details on the other injured were not immediately available.

Officials didn't immediately know whether any of the apartments in the building had been subdivided with illegal partitions, a common living arrangement in immigrant neighborhoods. Estimates of the number of people who lived in the building varied, and it was possible that some were living in illegally built rooms.

The building is on a quiet residential street near the Manhattan Bridge in the heart of Chinatown, not far from the neighborhood's main artery, Canal Street, where vendors hawk everything from knockoff handbags to live frogs and bootleg DVDs.