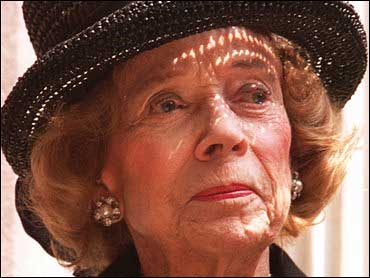 Millionaire socialite Brooke Astor, whose well-being is at the center of a legal battle between her son and grandson, has been moved to a hospital, where her condition is improving, her doctor said.

Dr. Sandra Gelbard, a specialist in internal medicine and critical care at Manhattan's Lenox Hill Hospital, told the Daily News in Thursday's editions that Astor's "condition has improved, and we are hopeful that she is going to go home in the very near future."

Gelbard said the hospital would issue a formal statement on Thursday.

In court papers filed last week, Astor's grandson, Philip Marshall, accused his father of ignoring the 104-year-old woman's health "while enriching himself with millions of dollars."

The lawsuit claims the elderly woman was forced to sleep in torn nightgowns on a couch that smelled of urine.

The papers — reported on Wednesday by the Daily News — seek the removal of 82-year-old Anthony Marshall as his mother's legal guardian and to have him replaced with Annette de la Renta, the wife of Oscar de la Renta, and J.P. Morgan Chase bank.

Astor ran the Astor Foundation after the death of her third husband, Vincent Astor, in 1959. He was the great-great-grandson of patriarch John Jacob Astor, who made a fortune in fur trading and real estate and was the wealthiest man in America by 1840.

Brooke Astor gave millions to the New York Public Library, the Metropolitan Museum of Art, Carnegie Hall and the Museum of Natural History. But she also funded smaller projects such as new windows for a nursing home and was noted for personally visiting the places she helped out.

She was a legendary figure in New York Society. The New York Times reported that Astor was once said to have thrown a would-be mugger off his game by saying, "Excuse me, we've not been introduced properly. I'm Mrs. Astor."

Astor has faded from sight in recent years amid declining health, including two broken hips. Once confined to her apartment, court papers say she was denied many of the staples of her high-society life.

Her son allegedly replaced her costly face creams with petroleum jelly. A French chef was fired, leaving her at the mercy of an "unmotivated cook" serving pureed peas, liver, carrots and oatmeal, according to the court papers, which were sealed by a judge on Wednesday.