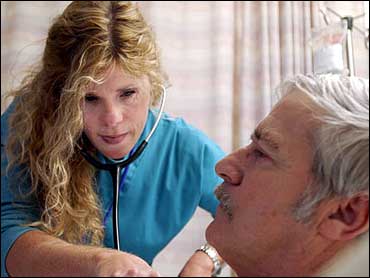 Registered nurse Julie Hill picks her own hours and pay by bidding on work shifts over the Internet - a kind of employment eBay that some hospitals are using to ease a growing nursing shortage.

Hill, who works with heart patients at St. Peter's Hospital here, always bids on the early shift so she can take her 11-year-old autistic son to therapy in the afternoon. Her asking price is $30 an hour and she has yet to be rejected.

"It works really well for me as far as keeping my flexibility," she says.

Shift bidding is among the newest tools hospitals are using to attract nurses. Already, hospitals are hiring more foreign nurses and offering ever-larger signing bonuses and other incentives.

Traditionally, hospitals have trouble filling overnight and weekend slots and rely on traveling nurses or those from temporary agencies to fill the gap. Through bidding, hospitals save labor costs by using fewer outside nurses while letting their own nurses control when they work and how much they earn.

"It has helped us keep our own staff and give them the opportunity to fill shifts that might not have been attractive to them before because of price," says Christine McCarthy, a nurse recruiter at St. Peter's.

Since 2001, St. Peter's has filled more than 127,000 hours and saved more than $1.7 million through online bidding. Its overall nurse vacancy rate dropped from 11 percent to 5 percent.

Other hospitals have followed, from Pittsburgh to Miami, with similar results.

Here's how shift bidding works: Nurses log onto a hospital's Web site, view all empty shifts in units like cardiac, intensive care or critical care and make an offer to work for a rate within a specified range posted by the hospital. The lowest bidder wins with skill level and other factors being equal.

The average bid at St. Peter's is $37 an hour, about 30 percent higher than the base rate paid to RNs, but less than the average $49 an hour agency nurses get.

About two-thirds of the bidding comes from St. Peter's employees seeking more work. Part-time nurses are the main bidders, while salaried nurses who bid are paid overtime. When non-hospital nurses bid, they must first pass an orientation process and are added to the payroll as bidders.

The American Nurses Association, which represents 2.6 million RNs, supports programs that give nurses control and flexibility over schedules and wages. But it does not think the shortage can be solved with the click of a mouse.

Hospitals "may use this as a short-term way to fill their slots and maybe save some money, but in terms of long-term patient care and the nursing shortage, I'm not sure that's the direction we need to be going in," association spokeswoman Carol Cooke said.

Hospital administrators agree that online bidding alone will not reverse the nursing shortage, but say it does help.

More than 30 states are grappling with a shortage estimated at 136,000 nurses. If the current trend continues, the deficit could hit more than 800,000 nurses nationwide by 2020, according to federal projections.

The national average vacancy rate for RN jobs is 13 percent, but many health experts expect the shortage to grow as nurses reach retirement age or take less-demanding, higher-paying jobs at HMOs or pharmaceutical companies.

Last year, Spartanburg Regional Healthcare System in South Carolina created a bidding site after learning about St. Peter's success. The system's three hospitals currently allow RNs and licensed practical nurses to bid and will expand to other staff in the coming months.

Spartanburg Regional Medical Center, the system's largest hospital with 588 beds, saw its nurse vacancy rate plummet from 20 percent to 7 percent since it went online. The hospital also cut the number of outside nurses by more than 90 percent, saving between $10,000 and $20,000 a week, and will phase out using agency nurses altogether by the end of the year.

"It lets us cover vacant shifts without having to bring in outside people who don't have the loyalty and dedication to the people of our community that our own nurses have," said Kathy Whelchel, vice president for patient care services.