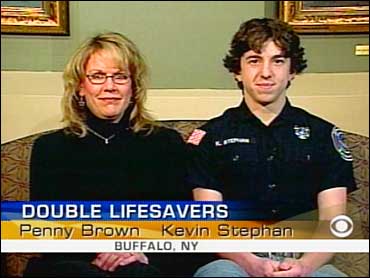 A boy whose life was saved by an off-duty nurse had the opportunity to save his savior's life seven years later.

The first incident happened in 1999, when Kevin Stephen went into cardiac arrest after being hit by a baseball bat at a game.

Penny Brown, a nurse, was at that game and saved Stephen's life.

In a remarkable twist of fate, Stephen was able to return the favor when Brown started choking at a restaurant where he was working.

told their stories
to The Early Show co-anchor Rene Syler.

It was lucky that Brown was at the game at all in 1999. She was supposed to be working, but had a slow night at the hospital. So she decided to go to her son's game and was there when Stephen took the blow.

"He was just in the wrong place," Brown said. "Another little boy was warming up, and Kevin, unfortunately, took a bat right directly in his chest. So he immediately fell to the ground and I had witnessed what had occurred."

Brown ran down from the stands and performed CPR.

Stephen went on with his life but felt he never had the chance to thank Brown properly until, by chance, she ended up at the restaurant where he works.

And, again, it was a lucky twist of fate that brought the two together. Stephen hadn't expected to work that night because it was exam week at his school. But because he didn't have any tests that day, his manager slipped him onto the schedule.

When Brown started to choke, Stephen rushed over to perform the Heimlich maneuver but had no idea the woman in his arms was Penny Brown.

"I did the Heimlich and she, like, sat down and just kept trying to catch her breath," Stephen told Syler. "My mom told me that that was Mrs. Brown who had saved my life."

The extraordinary events have given both heroes a lot to think about and Stephen says he feels it is more than coincidence that brought them together.

"I think, maybe, it was like divine intervention," he said. "I was just in shock. I was almost in disbelief."