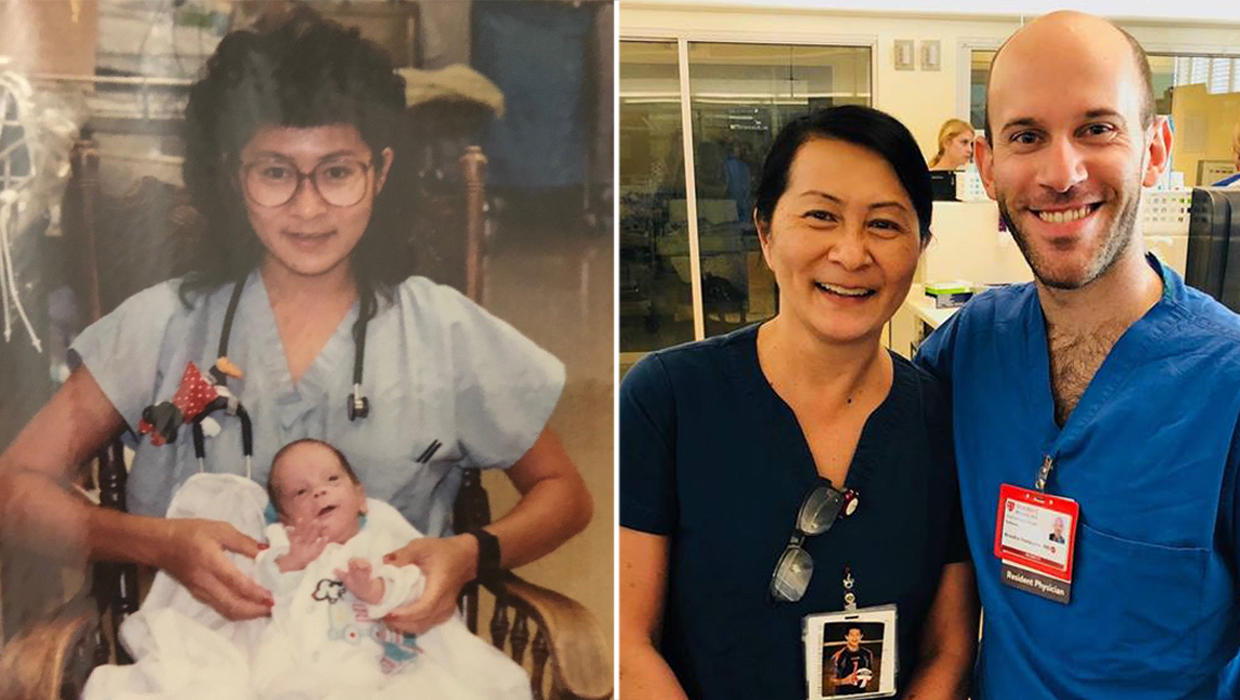 A California nurse had a heartwarming reunion with a baby she cared for nearly three decades ago. He's now grown up and works in the same hospital he was born in. Lucile Packard Children's Hospital Stanford shared the tale of the serendipitous reunion on Facebook, and the powerful story has gained widespread attention.

Nurse Vilma Wong has been on the job for 32 years, a local publication, The Mercury News, reports. A recent chance encounter exemplifies the long-lasting bond nurses like Wong can develop with their patients.

Twenty-eight years ago, Wong was the primary care nurse for a newborn who was rushed to the Neonatal Intensive Care Unit (NICU) after his mother's emergency C-section. His name was Brandon Seminatore, and the tiny baby boy weighed only two pounds and six ounces.

He spent 40 days in the unit and Wong helped him grow to a still-small five pounds, two ounces. Seminatore was finally able to leave the hospital with his parents. But unlike most babies, one day years later he returned.

Wong had never left, and she was working a shift earlier this month when she saw a new face in scrubs near one of the incubators. She asked the man his name. "Brandon Seminatore," he responded.

The nurse said that last name sounded familiar. "I kept asking where he was from and he told me that he was from San Jose, California, and that, as a matter of fact, he was a premature baby born at our hospital," Wong told The Mercury News. "I then got very suspicious because I remember being the primary nurse to a baby with the same last name."

Wong remembered the Seminatore baby's father was a police officer. She asked the man about this personal detail — one of the few she remembered.

"There was a big silence," Wong said. "And then he asked if I was Vilma."

He was shocked she remembered him, especially because she takes care of so many babies in the unit. He knew Wong's name because she and fellow nurse Kas Pilon are often talked about in their family and remembered for their care of Seminatore as an infant. He had always known who she was, but meeting her face to face was "surreal," he said.

His mother had urged him to find both nurses when he was on his month-long rotation at the hospital's NICU. "They were wonderful nurses," his mom, Laura Seminatore, told The Mercury News. "They helped calm a lot of our fears." Seminatore immediately texted his parents when he and Wong reunited in the NICU.

Seminatore had done a month-long rotation at the NICU last year, but didn't know if both nurses still worked there. Wong, who is 54 now, isn't leaving any time soon. She told the paper she loves her job and has no plans of retiring.

"She cares deeply for her patients, to the point that she was able to remember a patient's name almost three decades later," Seminatore said.

The icing on the cake was that his father, retired San Jose police officer David Seminatore, found a photo of Wong holding his infant son.

The nurse and doctor took a new photo together in the NICU — this time, Seminatore is a few inches taller than Wong, and he's wearing scrubs instead of a onesie and blanket. Like the old photo, Wong is still in her scrubs and has a big smile on her face.

Seminatore said his own history in the hospital may have been a factor in his decision to become a doctor. For Wong, heartwarming interactions like this are "kind of like your reward" for being a caregiver.