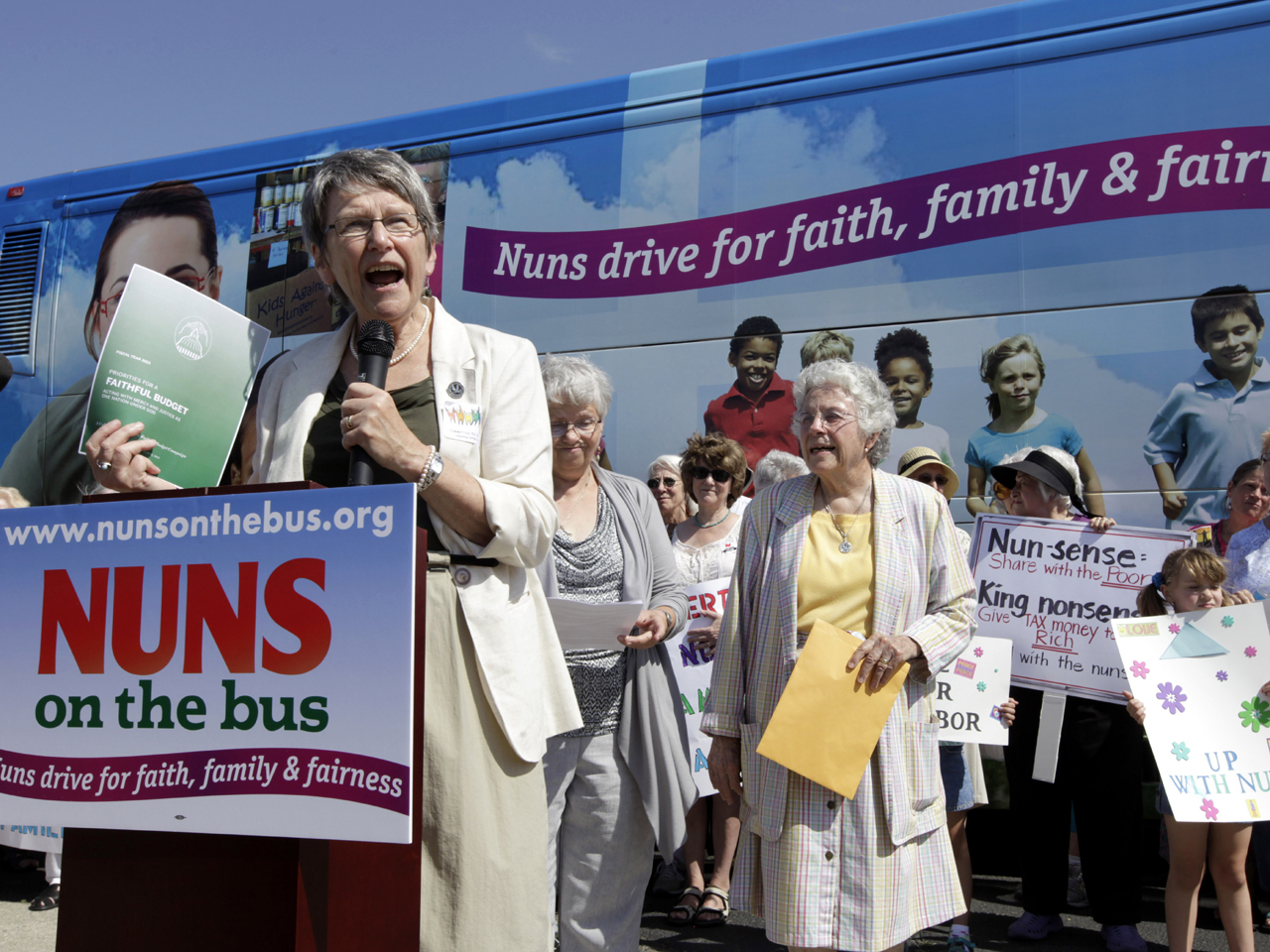 (CBS/AP) DES MOINES, Iowa - A group of Roman Catholic nuns are embarking on a two-week bus tour to advocate against Republican federal budget proposals that they say hurts low income and vulnerable populations.

The Nuns of the Bus tour is headed towards Ames, its first stop. The tour will directly target the current House Republican budget, authored by Rep. Paul Ryan, R-Wis. They will stop by nine states -- Illinois, Indiana, Iowa, Michigan, Ohio, Pennsylvania, Virginia, Maryland and Wisconsin -- before they are scheduled to finish in Washington July 2.

The tour was organized by Network, a Washington-based Catholic social justice group criticized in a recent Vatican report that said some organizations led by nuns have focused too much on economic injustice while failing to promote the church's teachings on abortion and same-sex marriage. The Vatican asked U.S. bishops to look at Network's ties to another group of nuns it is reorganizing because of what the church calls "serious doctrinal problems."

But, one thing both the nuns and the U.S. Conference of Catholic Bishops (USCCB) are aligned in their opposition of the Republican budget proposal.

"The Vatican recently criticized Catholic Sisters in the U.S. for spending too much time working for social justice instead of speaking out on issues such as gay marriage and abortion. Despite the controversy, Catholic Sisters stand with the Bishops in criticizing the Ryan budget and are committed to staying faithful to their mission to serve those in need," Nuns on a Bus said in their press release.

Sister Simone Campbell, Network's executive director, said while the tour may appear to have been organized to counter recent criticism of social activist nuns by the Vatican and American bishops, it was not. The timing was in response to consideration of the federal budget in Congress, she said.

"We're doing this because of what's happening on the Hill," she told The Associated Press in an interview. "We're desperate to get the word out, that's why we're doing it now."

But if the 14 nuns who will rotate on and off the bus during the next two weeks weren't trying to counter the Vatican, they likely did little to ease its concerns about social activism.

The tour kicked off with a rally that had the feel of a political event. About 20 supporters brought flowers and balloons and sang, "Alleluia," as the nuns boarded a modern tour bus decorated with bright-colored graphics.

The mandate to crack down on socially active nuns upset some church parishioners who turned out to support the nuns.

"They want to bully these nuns and shut them down and tell them: `Get back in your place, ladies.' No, it's not going to be that way anymore," said Mary Ann McCoy, of Des Moines, who attends St. Ambrose Cathedral.

She said the Vatican and bishops speaking so harshly of nuns has split the church.

"They're women of courage," McCoy said. "Back in the Old Testament they talked about prophets. A prophet is somebody who speaks for God and these are the things that God talked about: injustice, the poor, the marginalized, woman. Jesus was the greatest prophet when he went out and he shook things up a lot. Well, I think the sisters are walking the walk and talking the talk and that's what's important to us."

While the Vatican has criticized Network, church officials have not ordered a full-scale overhaul of it as is being done with another group, the Leadership Conference of Women Religious (LCWR). After a two-year investigation, the Vatican concluded the conference had undermined Roman Catholic teaching with radical feminist themes and taken positions that undermined Catholic teaching on the all-male priesthood, marriage and homosexuality. They claimed that the nuns were taking a liberal approach to core doctrine and promoting "radical feminist themes." Three U.S. bishops, including Seattle Archbishop J. Peter Sartain, have been given five years to reorganize that group.

The Leadership Conference of Women Religious (LCWR) which represents 57,000 U.S. Catholics nuns -- about 80 percent of the group -- said the charges were "based on unsubstantiated accusations and ... a flawed process." They asserted that the Vatican's decisions was creating a greater rift in the U.S. church.

On June 12, the nuns met with the head of the Congregation for the Doctrine of the Faith and the American bishop tasked by the Vatican to reform the group, Cardinal William Levada, Sartain, and two other church officials. LCWR president sister Pat Farrell said the meeting was "open," and they were able to directly state their concerns. Farrell said she was "grateful for the opportunity for open dialogue" and said she and executive director Sister Janet Mock would now report back to the LCWR board "to decide how to proceed from here."

Father Michael Amadeo, who attended the rally and is pastor of Holy Trinity Church in Des Moines, said that although the Vatican may have issues with the LCWR, he doesn't think the bus tour conflicts with church teachings.

"These are Catholic social teachings which we've had for decades," he said. "What they're trying to highlight both to communities as well as legislators is what our Catholic social teachers are, and they are about not only charity work but asking the tough questions. Why are these people homeless? Why are they in shelters? Why are they on food stamps? Part of our social justice teaching is asking questions about justice."

Amadeo said 300 people turned out Sunday night for a send-off prayer service for the nuns at his church. He said that's an indication of support and there are plenty of people committed to working for justice and helping the poor.

"Hopefully this will be a groundswell as it heads across the nation," he said.

King's office responded with an email faulting "the failed policies of President Obama and Nancy Pelosi," vowing to repeal the president's health care reform law and promising to pass a balanced budget amendment. The email did not say anything specifically about the nuns.

Ryan's spokeswoman also did not mention the nuns when she responded to a request for comment by sending several Internet links to interviews and opinion pieces he's written on the budget. One was published April 25 in the National Catholic Register and is posted on his website.

"Our budget ends welfare for those who don't need it, but strengthens welfare programs for those who do. Government safety-net programs have been stretched to the breaking point in recent years, failing the very citizens who need help the most," he wrote. "... We rightly pride ourselves on looking out for one another and government has an important role to play in that. But relying on distant government bureaucracies to lead this effort just hasn't worked."

Boehner's office and the United States Conference of Catholic Bishops did not immediately comment on the bus tour.