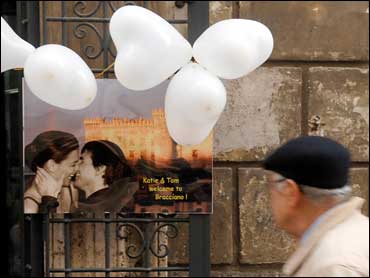 George W. Bush says he's encouraged by polls showing he is ahead of Al Gore nationally, but after he seeing his father lose in 1992, he's not taking any chances.

With several national polls showing the Texas governor widening his lead over Gore just days before the GOP convention, Bush headed to Kentucky and Ohio, two key states with 29 electoral votes between them.

Meanwhile in Philadelphia, Republicans announced that Bush's running mate, Dick Cheney, will be coming to the convention Sunday for a rally the day before the convention opens.

Bush declared himself pleased with the campaigning he and Cheney had done as a team since he announced his running mate on Tuesday, but said they would be hitting key battleground states separately during the rest of the campaign.

"Personally, he's obviously got a different style than I do - a little more laid back than mine," Bush said. Asked to describe his own style, he replied, "Not laid back."

The Democrats continued their criticism of Cheney's record and his ties to the oil industry. Aides to Gore are citing published remarks Cheney made last year welcoming OPEC's agreement to cut production - a deal that played a part in the recent rise in oil prices.

"I've been struck by the extent OPEC seems to have gotten its act together," said Cheney at an April 1999 energy conference in New Orleans. "A certain amount of near-term optimism is justified."

"This is only further evidence that a Bush-Cheney ticket would turn the Oval Office into the oil office," said Gore spokesman Chris Lehane.

For the first time since he put Cheney on the GOP ticket, Bush did not strike back at the Democrats' specific charges on Friday, instead praising Cheney's accomplishments and integrity.

But Bush spokeswoman Karen Hughes said that Cheney was talking to his corporate constituents at the time - an oil industry audience - "and members of the industry obviously did hope prices would be strong. The oil industry had been in a terrible depression, forced to lay off thousands of people."

Cheney was silent about the criticism, staying within the safer realm of introducing Bush at confetti-and-rock'n roll rallies in Springdale, Arkansas and Joplin, Missouri.

The campaign believes a flurry of new national polls shows the Democrats' fierce attacks on Cheney have fallen flat in the days leading up to the Republican National Convention. The surveys showed mixed reactions to Cheney's addition to the ticket.

Bush said he and Cheney make a great team because "he doesn't talk much and I do." Cheney conceded he was reticent. "I'm not going to set the house on fire, but I don't have to," he said.