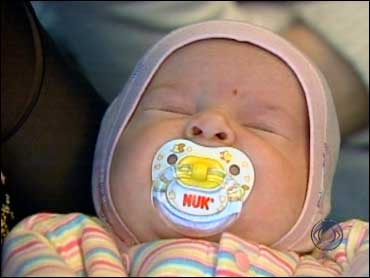 More babies were born in the United States in 2007 than any year in the nation's history, topping the peak during the baby boom 50 years earlier, federal researchers reported Wednesday.

There is both good and bad news from the more than 4.3 million births:

The U.S. population is more than replacing itself, a healthy trend.

However, the teen birth rate was up for the second year in a row.

The birth rate rose slightly for women of all ages, and births to unwed mothers reached an all-time high of about 40 percent, continuing a trend begun years ago. More than three-quarters of these women were 20 or older.

For a variety of reasons, it's become more acceptable for women to have babies without a husband, said Duke University's S. Philip Morgan, a leading fertility researcher.

Even happy couples may be living together without getting married, experts say. And more women - especially those in their 30s and 40s - are choosing to have children despite their single status.

The new numbers indicate the nation is experiencing a baby boomlet with fertility rates higher in every racial group. On average, a U.S. woman has 2.1 babies in her lifetime. The highest fertility rates were among Hispanics.

But it's not clear the boomlet will last long. Some experts think birth rates are already declining because of the economic recession that began in late 2007.

"I expect they'll go back down. The lowest birth rates recorded in the United States occurred during the Great Depression - and that was before modern contraception," said Dr. Carol Hogue, an Emory University professor of maternal and child health.

The 2007 statistical snapshot reflected a relatively good economy coupled with cultural trends that promoted childbirth, she and others noted.

(CDC)
Meanwhile, U.S. abortions have been dropping to their lowest levels in decades, according to other reports. Some have attributed the abortion decline to better use of contraceptives, but other experts have wondered if the rise in births might indicate a failure in proper use of contraceptives. Some earlier studies have shown declining availability of abortions.

Cultural attitudes may be a more likely explanation. Morgan noted the pregnancy of Bristol Palin, the unmarried teen daughter of former Republican vice presidential candidate Sarah Palin. The young woman had a baby boy in December, and plans for a wedding with the father, Levi Johnston, were scrapped.

"She's the poster child for what you do when you get pregnant now," Morgan said.

Teen women tend to follow what their older sisters do, so perhaps it's not surprising that teen births are going up just like births to older women, said Sarah Brown, the chief executive for the National Campaign to Prevent Teen and Unplanned Pregnancy.

Indeed, it's harder to understand why teen births had been declining for about 15 years before the recent uptick, she said. It may have been due to a concentrated societal effort to reduce teen births in the 1990s that has waned in recent years, she said.

The statistics are based on a review of most 2007 birth certificates by the National Center for Health Statistics, part of the Centers for Disease Control and Prevention. The numbers also showed:

Cesarean section deliveries continue to rise, now accounting for almost a third of all births. Health officials say that rate is much higher than is medically necessary. About 34 percent of births to black women were by C-section, more than any other racial group. But geographically, the percentages were highest in Puerto Rico, at 49 percent, and New Jersey, at 38 percent.

The pre-term birth rate, for infants delivered at less than 37 weeks of pregnancy, declined slightly. It had been generally increasing since the early 1980s. Experts said they aren't sure why it went down.

Among the states, Utah continued to have the highest birth rate and Vermont the lowest.

CDC officials noted that despite the record number of births, this is nothing like what occurred in the 1950s, when a much smaller population of women were having nearly four children each, on average. That baby boom quickly transformed society, affecting everything from school construction to consumer culture.

Today, U.S. women are averaging 2.1 children each. That's the highest level it's been since the early 1970s, but is a relatively small increase from the rate it had hovered at for more than 10 years and is hardly transforming.

"It's the tiniest of baby booms," said Morgan in agreement. "This is not an earthquake; it's a slight tremor."