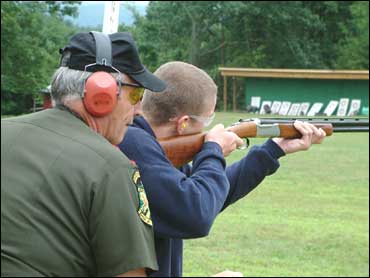 Hunters remain a powerful force in American society, as evidenced by the presidential candidates who routinely pay them homage, but their ranks are shrinking dramatically and wildlife agencies worry increasingly about the loss of sorely needed license-fee revenue.

New figures from the U.S. Fish and Wildlife Service show that the number of hunters 16 and older declined by 10 percent between 1996 and 2006 - from 14 million to about 12.5 million. The drop was most acute in New England, the Rocky Mountains, and the Pacific states, which lost 400,000 hunters in that span.

The primary reasons, experts say, are the loss of hunting land to urbanization plus a perception by many families that they can't afford the time or costs that hunting entails.

Some animal-welfare activists welcome the trend, noting that it coincides with a 13 percent increase in wildlife watching since 1996. But hunters and state wildlife agencies, as they prepare for the fall hunting season, say the drop is worrisome.

"It's hunters who are the most willing to give their own dollar for wildlife conservation," Patterson said.

Compounding the problem, the number of Americans who fish also has dropped sharply - down 15 percent, from 35.2 million in 1996 to 30 million in 2006, according to the latest version of a national survey that the Fish and Wildlife Service conducts every five years.

Of the 50 state wildlife agencies, most rely on hunting and fishing license fees for the bulk of their revenue, and only a handful receive significant infusions from their state's general fund.

"They're trying to take care of all wildlife and all habitats on a shoestring budget," said Rachel Brittin of the Washington-based Association of Fish and Wildlife Agencies.

In New Hampshire, only multiple fee increases - which produced numerous complaints - have enabled the Fish and Game Department to keep revenues robust. Its ranks of registered hunters has dropped from 83,292 in 1996 to 61,076 last year, according to department spokeswoman Judy Stokes.

"We hear concerns about land access," Stokes said. "People grew up hunting - you went out with your family, your uncle. And now you go back, and there's a shopping plaza or a housing development. Some of your favorite places just aren't available anymore."

Indeed, hunting remains vibrant in many rural states - 19 percent of residents 16 and older hunted last year in Montana and 17 percent in North Dakota, compared with 1 percent in California, Connecticut, Massachusetts and New Jersey. Nationally, 5 percent of the 16-and-over population hunted in 2006, down from 7 percent in 1996.

As their ranks dwindle, hunters are far from unified. The often big-spending, wide-traveling trophy hunters of Safari Club International, for example, have different priorities from duck hunters frequenting close-to-home wetlands.

One rift involves hunters disenchanted with the National Rifle Association, which runs major hunting programs and lobbies vigorously against gun control. A Maryland hunter, Ray Schoenke, has formed a new group, the American Hunters and Shooters Association, primarily as a home for hunters who would support some restrictions on gun and ammunition sales.

Political support for hunting remains strong, though, with several states recently enshrining the right to hunt and fish in their constitutions.

Last month, President Bush ordered all federal agencies that manage public lands to look for more room for hunting. In the 2004 presidential campaign, both Bush and Democratic rival John Kerry courted hunters' and gun owners' votes. A camouflage-jacketed Kerry even toted a shotgun during a goose hunt.

Among the 2008 candidates, Democrat Bill Richardson aired a TV ad showing him hunting, while Republican Mitt Romney was derided for calling himself a lifelong hunter even though he never had state hunting licenses.

Public support for hunting also is high, in part because huge deer populations have become a nuisance in many areas. Duda's surveys indicate less than 25 percent of Americans oppose hunting, although groups such as People for the Ethical Treatment of Animals denounce it as cruel.

Most major animal-welfare and conservation groups don't campaign to end hunting, but some lobby against specific practices such as bear hunting or "canned" hunts in which game is confined in fenced areas and shot by hunters who pay large sums for the opportunity.

"As a matter of principle, we should not condone the killing of any animal in the interest of sport," said Andrew Page of the Humane Society of the United States. "But as a matter of pragmatism, we target those practices that even hunters would agree are egregious."

The Humane Society welcomed the new federal data showing a surging number of birdwatchers, wildlife photographers and other wildlife watchers. They increased from 62.8 million in 1996 to 71.1 million in 2006, spending $45 billion on their activities compared to $75 billion spent by hunters and anglers.

"The American attitude regarding wildlife is changing," Page said. "I suspect the day will come when a presidential candidate goes to a local humane society to adopt a homeless animal, rather than go to the field and pose as a hunter with a gun."

Rob Sexton, a vice president of the U.S. Sportsmen's Alliance, said one upside of the shrinking numbers is that hunting groups are more motivated to seek remedies, such as access to more land and less burdensome regulations.

"There are still a lot of us," he said. "Hunting is a great passion for our people."