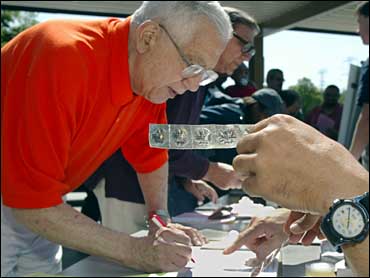 It's a cheap tablet that does one thing: protect the thyroid gland from one type of radioactive fallout. But with concern over radiological terrorism growing, potassium iodide is hot — even though it's not a cure-all.

One Internet site, NukePills.com, reported orders for 10,000 packs of the pills on Monday alone.

People who live near nuclear reactors have been stocking up since Sept. 11, in case of an attack or accident. But don't assume you need the drug because of "dirty bomb" scenarios now making headlines, experts caution.

Potassium iodide would be helpful only if a dirty bomb used radioactive iodine instead of other radioactive substances, and then only for people close to the explosion.

"You shouldn't go, 'Oh my god, I just heard there was a dirty bomb 20 miles away so I'm automatically going to take it,'" says radiation expert Jonathan Links of Johns Hopkins University, who is helping Baltimore officials prepare for the possibility of dirty bombs.

"Just because you're in the same town with a dirty bomb doesn't mean you take potassium iodide," agrees Dr. David Orloff of the Food and Drug Administration. "Wait 'til you hear instructions from public health officials."

Potassium iodide, chemical symbol KI, is the only medication for internal radiation exposure. But it has just one use — to prevent thyroid cancer by shielding the thyroid from radioactive iodine. It blocks no other type of radiation, and protects no other body part.

Just as with any medication, overdoses of potassium iodide can be dangerous. Some people may experience allergic reactions, including nausea or rashes, from taking potassium iodide.

Sheltering and evacuation remain the cornerstones of protection.

Still, the Nuclear Regulatory Commission is offering states enough KI to treat every resident within 10 miles of a reactor, because radioactive iodine is likely to be released during a serious reactor accident or attack.

Many people are buying their own, largely through Internet sites like NukePills.com that also point out reactor locations. FDA-approved KI is sold without a prescription, for about $1 a pill. A dose is one tablet a day for adults, smaller amounts for children.

A traditional explosive releases small amounts of radioactive material. Experts say a dirty bomb would probably use a substance other than radioactive iodine.

How would people know?

In Baltimore, emergency officials who respond to explosions are being trained to operate credit card-sized radiation detectors, Links said. Laboratory testing of any radioactive samples could tell what kind and how much of a substance was present in a few hours.