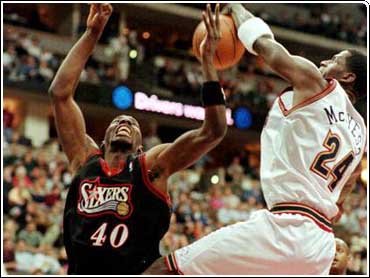 Van Exel and McCloud made key baskets in the final 1:21, and the Nuggets defeated the Philadelphia 76ers 83-80 Monday night.

"We ran a couple of plays we hadn't run since early in the game and we sort of snuck up on them," Van Exel said. "We executed well down the stretch, something we hadn't done in close games."

The game apparently was the last one Ron Mercer will play for the Nuggets this season. Denver agreed to a five-player trade with Orlando on Monday night, according to players involved.

Mercer had 15 points, Van Exel 14 and Antonio McDyess 12 for Denver.

Nuggets coach Dan Issel praised Van Exel's defense on Iverson, who was only 9-for-22 from the floor.

"I don't know what Iverson got, but I thought Nick did a great job defending him," Issel said. "Nck has been terrific defensively, first on (Houston's) Steve Francis (on Friday) and tonight on Iverson. And he doesn't shy away from big shots."

The Nuggets won despite shooting a season-low 44 percent (7 of 16) from the line and committing a season-high 25 turnovers. But they also had 15 blocked shots, one off their season high.

"Some of our guys took some bad shots," Iverson said, "and I took some bad shots myself. Coach (Larry Brown) told us after the game we had four opportunities to win that game at the end, and we blew them all. When you have four and you can't get it done, there's something wrong."

Added Brown, "We did about everything you can do to kill an opportunity to win a game on the road. Tonight was the worst shot selection we've had in a long time."

Van Exel countered with a 19-foot jumper with 1:21 remaining and, following two Sixers turnovers, McCloud hit a 3-pointer for an 81-77 lead with 24.9 seconds left.

Four seconds later, Snow sank a 3-pointer. Larry Hughes then promptly fouled Van Exel, who made both free throws for an 83-80 margin with 16.5 seconds left.

Snow then missed a 3-point attempt but the 76ers retained possession when the rebound went out of bounds. Hughes missed from the corner at the buzzer.

Early in the seesaw fourth quarter, Iverson's two free throws and his fastbreak layup produced a 63-63 tie. McDyess then hit two jumpers for a four-point lead.

Iverson made two more free throws and Hughes a fastbreak layup for a 72-71 lead with 3:58 remaining. Van Exel's short jumper, a free throw by McDyess and Raef LaFrentz's layup made it 76-72, before the Sixers scored the next five points, capped by Snow's layup.

Iverson scored 14 points in the first quarter as the 76ers overcame 37 percent shooting to take a 26-19 lead. Philadelphia hit only 3 of its first 13 shots but trailed by only one point, 10-9. The Sixers scored the last seven points of the quarter, including five by Iverson.

Neither team led by more than five points in the third period, which ended with Denver holding a 61-57 lead.