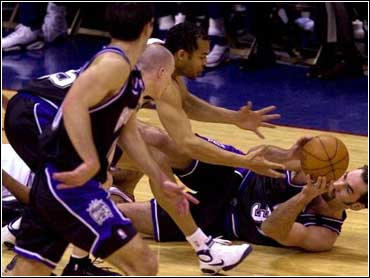 It took the Denver Nuggets more than 49 minutes to finally get a lead. They weren't about to let it go.

Antonio McDyess had 29 points and 13 rebounds, and the Denver Nuggets made comeback after comeback Monday night in a 123-117 overtime victory over the Sacramento Kings.

Nick Van Exel added 27 points and 15 assists for the Nuggets, who overcame an early 19-point deficit and a career-best performance by Sacramento shooting guard Predrag Stojakovic.

"To me every win is meaningful. I don't care how it happens or when it happens," Van Exel said. "We were down 19 and we gave ourselves a chance to win instead of it being the other way around, blowing a 19-point lead."

Stojakovic, starting in place of ailing Nick Anderson, scored a career-high 30 points including 11 straight at one stretch of the fourth quarter. Chris Webber had 25 points and 15 rebounds for the Kings, who lost their second straight overtime game.

"This was tough to lose after having to come in this morning after an OT game," Webber said. "At that point, you kind of say, `Not again.' When you play back-to-back overtime games, you don't necessarily want the second one to be in Denver."

The Nuggets got a balanced offensive attack with four players scoring more than 20 points as Chris Gatling and Bryant Stith each scored 21 off the bench. Raef LaFrentz chipped in with 10 points and 10 rebounds.

Gatling sparked Denver with 18 points in the first half, but the Nuggets didn't take their first lead until McDyess made two free throws 1:37 into overtime.

Denver never trailed again as LaFrentz hit the team's 12th 3-pointer of the night for a 119-115 lead with 1:29 remaining. McDyess followed a Sacramento turnover with an easy basket in the lane 16 seconds later.

"It feels great," McDyess said. "They were up by 20 and it seemed like at one time, the team was going to give up, but we came out and put the pressure back on them and started playing well."

Stith sent the game into overtime, tying the score at 108 on a 3-pointer with 38.6 seconds left. The Kings turned the ball over on their next possession, and Stith missed a long 3-point try at the end of regulation.

"They made every shot they had to make at the end of the fourth quarter," Kings coach Rick Adelman said. "They didn't make one until the end of regulation."

After watching Sacramento turn away several challenges, the Nuggets used a 12-2 run to pull within a point with 6:02 left. Stojakovic responded with a pull-up jumper, a layup and two 20-foot shots in a 90-second span to give the Kings a 101-92 lead with 4:06 remaining.

"I didn't think I was going to miss," Stojakovic said. "I did as much as I could. When they double-teamed us inside, I stepped out and made the shots."

Denver made its final charge behind back-to-back 3-pointers by Van Exel and Stith's 3-pointer in the final minute.

"I hear about it every day. `As Nick Van Exel goes, so do the Nuggets.' I know the pressure's on me," Van Exel said. "If the shot clock's going down, get the ball to me. Let me make a mistake. I'll take that pressure. I don't care."

Jon Barry, averaging eight points a game, hit three 3-pointers and had 14 points in the second quarter as the Kings took a 13-point halftime lead.