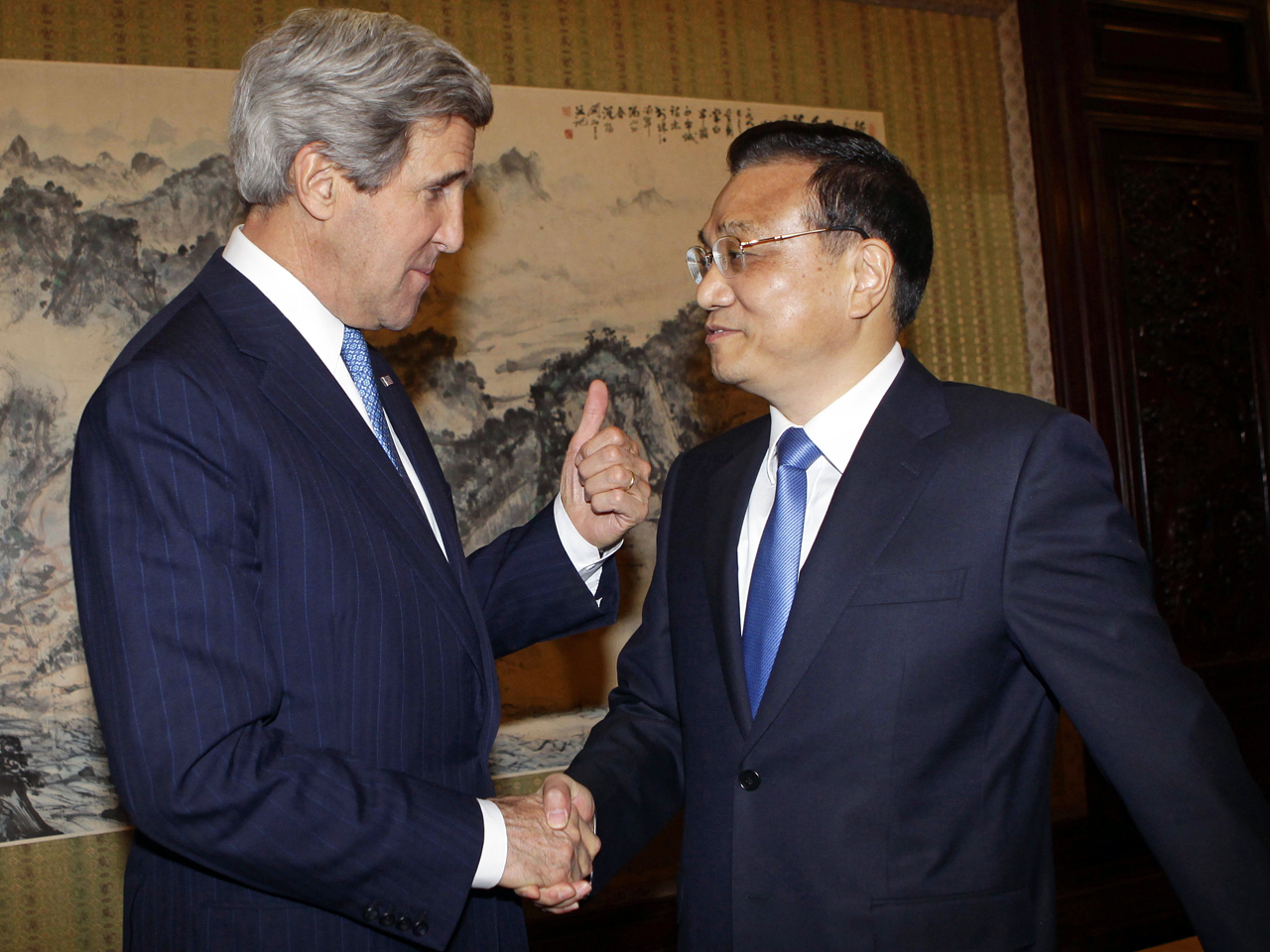 BEIJING The United States and China committed Saturday to a process aimed at ridding North Korea of its nuclear weapons, with the Obama administration gaining at least the rhetorical support of the only government that can exert significant influence over the reclusive North.

The question now is whether Beijing will make good on its pledge to uphold "peace and stability" and work with Washington on achieving the goal of a nuclear-free Korean peninsula.

CBS News correspondent Margaret Brennan, reporting from Beijing, said on "CBS This Morning: Saturday" that U.S. Secretary of State John Kerry met with China's president and foreign minister and pushed them to freeze North Korea's accounts so that it can no longer purchase weapons.

But, so far, that hasn't worked. Brennan reports China's having its own trouble influencing North Korea. Rising tensions in the Korean peninsula recently led China's president to warn of regional chaos. China's worried that a flood of North Korean refugees will spill across its border if war breaks out.

China's also concerned for its security, Brennan reports. A state-owned news service reported that an air raid drill was held in a Chinese town on the North Korean border Friday.

Saturday's declarations from both nations' foreign policy chiefs came as North Korea appears to be readying a missile test that has caused grave concern for the U.S. and its two close Asian allies, South Korea and Japan.

"We are able — the United States and China — to underscore our joint commitment to the denuclearization of the Korean peninsula in a peaceful manner," Kerry told reporters in Beijing before having dinner with State Councilor Yang Jiechi.

Kerry and Yang said they'd seek a peaceful resolution of the North Korean nuclear standoff, which has only grown worse in recent months under its young leader Kim Jong Un.

Since testing an atomic device in February, the North has threatened new tests of its missile capacity and even talked about launching nuclear strikes against the United States, while expanding its U.N.-outlawed uranium and plutonium enrichment program.

"We agreed that this is of critical importance for the stability of the region and indeed for the world and indeed for all of our nonproliferation efforts," Kerry said. "This is the goal of the United States, of China" and of other countries that hope to resume nuclear talks one day with North Korea.

"From this moment forward we are committed to taking actions in order to make good on that goal," he added. "And we are determined to make that goal a reality. China and the United States must together take steps in order to achieve the goal of a denuclearized Korean peninsula. And today we agreed that further discussions to bear down very quickly with great specificity on exactly how we will accomplish this goal."

Kerry said U.S. Gen. Martin Dempsey, chairman of the Joint Chiefs of Staff, and representatives from U.S. intelligence agencies would travel to Beijing later this month. Kerry also is sending his deputy at the State Department, William Burns, as part of the effort to "make sure that this is not rhetoric but that it is real policy that is being implemented."

"China is firmly committed to upholding peace and stability and advancing the denuclearization process on the Korean peninsula," he said through an interpreter.

"We maintain that the issue should be handled and resolved peacefully through dialogue," Yang said, adding that China would work with the United States and other nations to resume six-party talks with North Korea that fell apart for good four years ago.

Amid almost daily North Korean threats, the U.S. has been counting on China to force its unruly neighbor to stand down. It's a strategy that has produced uneven results over decades of American diplomacy, during which the North has developed and tested nuclear weapons and repeatedly imperiled peace on the Korean peninsula.

But with only the counter-threat of overwhelming force to offer the North Koreans, the U.S. has little other option.

In their statements delivered side by side, neither Kerry nor Yang specifically addressed the immediate crisis: a North Korean test of a missile with a range of up to 2,500 miles that the U.S. believes could happen any day. Later, Kerry said at a news conference that Washington and Beijing "both call on North Korea to refrain from any provocative steps and that obviously refers to any future missile shoot."

Kerry and Yang focused primarily on the long-term problem, which is a nuclear program that may soon, if not already, include the capability to deliver a warhead on a missile.

The question of North Korea's capacity has been subject to great debate in Washington this past week after a U.S. intelligence assessment suggested North Korea had the capacity to put a nuclear warhead on a missile, even if any such weapon would have low reliability.

China has the greatest leverage over North Korea, a country that like few in the world actually cherishes its isolation.

The Chinese dramatically have boosted trade ties with their neighbors and maintain close military relations some six decades after they fought side by side in the Korean War. They provide North Korea with most of its fuel and much of its food aid.

And China has a history of quickly reversing course after talking tougher with North Korea. In late 2010, as American officials were praising Beijing for constructive efforts after the North shelled a South Korean island, a Chinese company agreed to invest $2 billion in a North Korean industrial zone.

"There is no question in my mind that China is very serious — very serious — about denuclearizing," Kerry told reporters after his day of talks with top Chinese officials including new President Xi Jinping and Premier Li Keqiang. He said no options were taken off the table in their discussions, without going into specifics.

Beijing, which values stability in its region above all else, clearly has different priorities than Washington.

China's greatest fear is the implosion of North Korea's impoverished state and the resulting chaos that could cause, including possibly millions of refugees fleeing across the border into China.

For that reason, China has in many ways looked past North Korea's bellicose rhetoric and activity, prioritizing the security of Kim's government, like his father's and grandfather's, over nuclear proliferation concerns.

China also remains deeply wary of any American military buildup in its backyard. Chinese officials are suspicious that the containment effort toward North Korea may be part of the long-term U.S. strategy to expand its influence in the region and even ring in fast-growing China with countries closer to Washington.

U.S. officials say they've gone to great lengths to explain to China that the American objective in North Korea, at least in the short term, is not to change governments.

The U.S. abhors the North's human rights record, its regular provocations and military links with other international pariahs such as Iran. But the U.S. has stressed over years of conversations with Beijing that pushing for North Korean denuclearization could reinforce stability.

In Seoul on Friday, Kerry said President Obama had canceled a number of military exercises planned with South Korea. The message that the U.S. wasn't seeking a military confrontation was directed as much to the North as to Beijing.

The Obama administration believes it may now have greater scope for diplomatic progress.

It has pointed to Xi's recent criticism of the North as illustrative of a subtle shift in China's outlook. Beijing also has backed U.N. penalties in response to North Korea's tests of a nuclear device and intercontinental ballistic missile technology over the past four months.