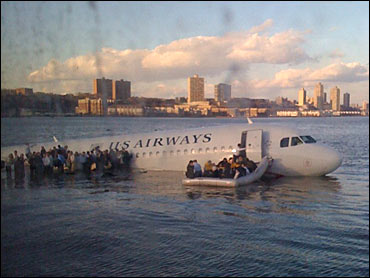 US Airways Flight 1549 could have made it back to New York's LaGuardia Airport after colliding with geese last year, but under the circumstances the captain's decision to ditch into the Hudson River was the better choice, documents released Tuesday by a federal safety panel said.

The documents, released as the National Transportation Safety Board prepared to consider safety lessons from the accident, show that if pilot Chesley "Sully" Sullenberger had immediately attempted to return to LaGuardia after ingesting geese into both engines the Airbus A320 would have made it - barely.

In simulators at Airbus's training center in Toulouse, France programmed to recreate the conditions faced by US Airways Flight 1549 on that fateful day, pilots were repeatedly able to turn the airliner around after the engines lost power and successfully land on a runway back at LaGuardia, reports CBS News producer Carter Yang.

But that scenario would have required Sullenberger to make an immediate decision with little or no time to assess the situation. He also would have had no way of knowing that he would be successful, and therefore would have been risking the possibility of a catastrophic crash in a densely populated area.

"Although an emergency return to La Guardia Runway 13 was technically feasible from an aircraft flight performance point of view, the emergency landing on the Hudson seems the most appropriate decision," Airbus said in an assessment submitted to the board.

Sullenberger chose instead to glide the plane into the river, where a rupture near the plane's tail sent water gushing into the cabin. All 155 passengers and crew aboard managed to escape the sinking aircraft.

Among the issues the safety board is expected to consider are whether during its meeting is whether planes - especially aircraft engines - should be required to withstand collisions with large birds.

The board has long been troubled by the danger to aviation posed by growing populations of many large bird species, including Canada geese, snow geese and white pelicans. The engines on the ditched airliner were designed to withstand a collision with a bird weighing up to 4 pounds. Some more recent jet engines are required to withstand a bird weighing up to 8 pounds.

But a large Canada goose can weigh almost twice that much.

"They've got to deal with the certification standards for these engines based on the size of these birds," said former NTSB board member Kitty Higgins.

Higgins, who represented NTSB in New York in the early stages of its investigation into the Jan. 15, 2009, accident, said the board considered recommending to the Federal Aviation Administration last summer that aircraft engines be required to withstand the impact of larger birds.

However, a decision was made to defer a recommendation until the investigation into Flight 1549 was complete, she said.

Another concern was that damage to the A320 from the force of hitting the river prevented the rear escape slides from being used to evacuate passengers - a serious problem could have proved costly if circumstances had been a little different, Higgins said.

Air crashes involving water landings have become so unusual - especially for planes not flying over the ocean - that until Flight 1549 there had been little emphasis on preparing for them. Sullenberger and First Officer Jeffrey Skiles were praised after the accident for their quick judgment, precision flying and teamwork.

It's likely the board will consider whether pilots should receive simulator training for water landings, Higgins said.

As Yang notes, Sullenberger, now retired, discusses his decision in detail in his book "Highest Duty: My Search for What Really Matters."

"I knew that if I chose to turn back across this densely populated area, I had to be certain we could make it," Sullenberger writes. "Once I turned toward LaGuardia, it would be an irrevocable choice. It would rule out every other option. And attempting to reach a runway that was unreachable could have had catastrophic consequences for everyone on the airplane and who knows how many people on the ground. Even if we made it to LaGuardia and missed the runway by a few feet, the result would be disastrous."