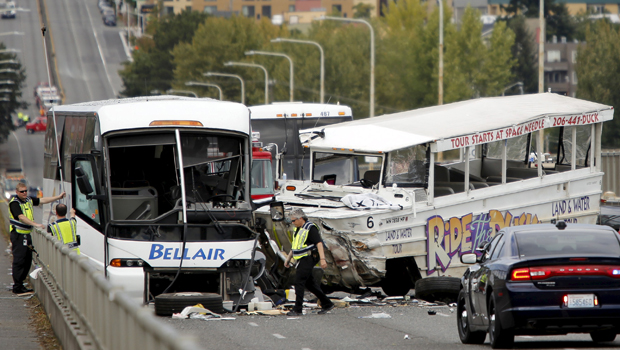 SEATTLE -- The left front axle of the duck boat involved in a deadly Seattle accident was sheared off, but federal investigators said Saturday they don't know if it was damaged before the collision with a charter bus that killed four international college students.

National Transportation Safety Board Member Earl Weener said the axle will be sent to a federal lab for further examination. It's too soon to know how the axle was damaged, or if it happened before the collision, Weener said.

Witnesses have said they saw the duck boat's left tire lock up Thursday as it swerved into a charter bus carrying international students over a bridge. Four North Seattle College students from Austria, China, Indonesia and Japan were killed.

"The left front axle was sheared off -- for what reason yet, we don't know," Weener said at a news conference.

Investigators are also examining the charter bus and two other vehicles involved in the accident -- a pickup truck and an SUV. Weener also said investigators would determine what the drivers of the duck boat and the charter bus were doing for the three days before the crash.

The federal probe is expected to take months, and Weener said "it's way too early to say anything about a probable cause."

The investigation is being watched by other operators of the hugely popular duck boat tours.

"Safety and security are always a concern," said Cindy Brown of Boston Duck Tours. "When anything happens in our industry, we're all acutely aware."

Brown said her operation hasn't changed any procedures, but the owners and safety team would evaluate the situation after the federal investigation is complete.

The amphibious vehicle tours are offered throughout the United States and the world, including in Philadelphia; Austin, Texas; Miami; Ft. Lauderdale; and London.

It's the first time the NTSB has looked into a land crash of the amphibious vehicles, which critics say are too dangerous for city streets. The federal agency has scrutinized duck tour vehicles several times when they've been in accidents on water.

Federal investigators will spend a week or more on site.

State regulators also have opened an investigation, which entails inspecting all vehicle and driver records.

The amphibious vehicle involved in the crash -- known as Duck No. 6 -- underwent regular annual examinations by a federally certified inspector, most recently in 2015 and 2014, and met federal standards, Washington Utilities and Transportation Commission spokeswoman Amanda Maxwell said.

The state also reviews the company's fleet every few years, looking for systemic problems, Maxwell said. The last review, in December 2012, focused on a sample of the company's vehicles and did not include Duck No. 6.

"So far, our investigators are satisfied with the maintenance records" of the duck tours vehicle, Maxwell said.

Katie Moody, 30, was hospitalized in satisfactory condition Saturday with a broken collar bone. She was with her parents on the Ride the Ducks tour when it crashed into the tour bus.

"It felt like we lost control and he said, 'Oh no', and I looked up and saw the bus coming right at us. It was a really hard hit," Moody told CBS affiliate KIRO.

Moody and her father, Greg, were ejected onto the bridge deck

"I was thrown out. I must have blacked out or had my eyes closed. I remember waking up on the freeway and I saw people running towards us from their cars to check on us," remembered Greg Moody.

"I'm really sorry for the people who died -- the families. We were fortunate, very fortunate, and I have to thank God for that to be honest with you," said Greg Moody, who was treated and released from the hospital.

The Moodys, who live in Fremont, California, said they were thankful to the strangers and first responders who helped them.

"It just renewed my faith in humanity," said Katie Moody. "...Compassion and making sure everyone was okay. And they thought it was very important for me to know my parents were okay."

Barb Graff, Seattle's director of the Office Emergency Management, said a private location has been established for families of the deceased and injured, where city, county and Red Cross workers are offering assistance and mental health counseling. Several hotels in Seattle are making rooms available to the families free of charge, Graff said, and Delta and Alaska airlines are helping with flights.

"We're doing everything we can to help families make it through the tough time," Graff said.