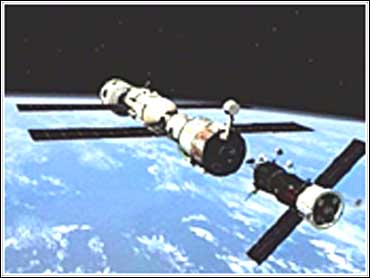 A cargo craft carrying supplies docked with the International Space Station on Tuesday in preparation for the first long-term manned mission to the orbital laboratory, officials were quoted as saying.

Itar-Tass news agency quoted officials at Mission Control outside Moscow as saying that the Progress M1-3 had docked with the station at 2013 GMT.

The ship was carrying 2.4 tons of fuel, clothing and other supplies. It was launched Sunday from the Baikonur cosmodrome in Kazakstan. It docked at about 12:15 a.m. Moscow time.

The space station, being built jointly by the United States, Russia, Europe and Japan, has been described as one of the most ambitious engineering projects ever and will cost up to $60 billion.

Construction is now expected to speed up, and the space station is scheduled to be complete in 2005, after more than 40 more launches. When complete, the station will loom seven stories high and become one of the brightest objects in the night sky.

Seven full-time crew members will live and work in a space as big as the cabin of a Boeing 747 jumbo jet.

Russia sent into orbit the Zvezda living quarters module last month, making possible a four-month mission to the station by two Russians and one American planned to begin on Oct. 30. It contains living quarters and a guidance system.

The fuel will be used to adjust the space station's orbit. The ship was also delivering scientific instruments, linen and personal hygiene supplies.

It is the first of two Progress missions ferrying supplies to the space station in preparation for the arrival of the first crew. The next supply mission will be in late August.

Russia's inability to pay its bills and rocket problems had delayed the module's installation by two years.

©2000 CBS Worldwide Inc. All Rights Reserved. This material may not be published, broadcast, rewritten, or redistributed. The Associated Press and Reuters Limited contributed to this report