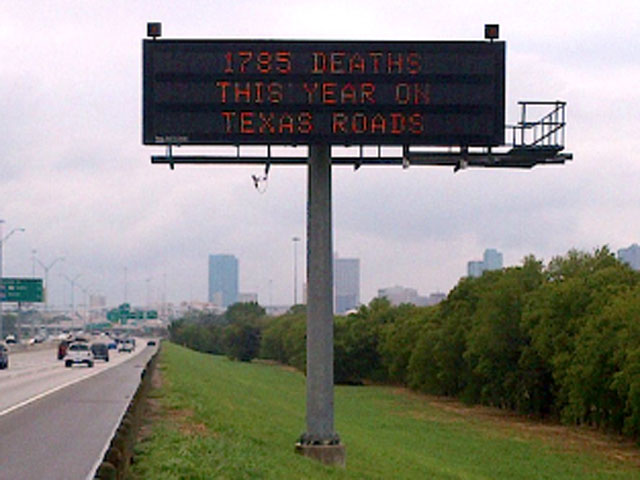 (CBS) NORTH TEXAS - The Texas Department of Transportation is about to display a sobering new message on digital highway billboards across the state, CBS DFW reports.

The number of deaths on the state's highways this year will be in drivers' faces, and, officials hope, on drivers' minds, to deter them from drinking, texting, speeding, and anything else they might do to put themselves, and others, at risk.

As of now, the flashing advisory will indicate that 1785 people have died on Texas roads this year. TxDOT officials say new and updated year-to-date traffic death numbers will be displayed for one week, every month.

"We think that pointing out the number of deaths that have occurred so far this year will make somebody think twice maybe about whether they should pick up that cell phone and text somebody, or whether they should buckle that seatbelt," TxDOT spokesman Mark Pettit said.

While the number of people killed in Texas crashes has declined some 21-percent since 2003, in 2011 there were still 3015 people killed on Texas roads. There were no days without at least one traffic fatality.

"When you've got 25 million people in the state it might not seem so bad," Pettit said. "When you're losing as many as 250 people a month we just find it ridiculous and we want to make sure we do everything we can to raise awareness."

TxDOT has more than 700 digital message boards along state highways.