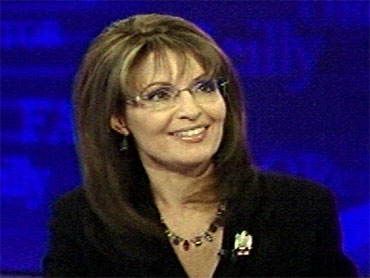 (FOX News Channel)
The National Organization for Women says former Alaska Gov. Sarah Palin was "missing our point" when she criticized NOW and other groups for opposing an anti-abortion ad to air during the Super Bowl.

Reproductive rights groups and women's groups have criticized CBS for its decision to air an "issues" ad during the Super Bowl featuring college football star Tim Tebow and his mother. The ad, financed by conservative Christian group Focus on the Family, recounts the story of how Tebow's mother chose not to terminate her pregnancy in spite of problematic conditions.

Palin jumped into the debate on her Facebook page, saying women's groups were getting into a "ridiculous situation" by opposing the ad.

"Women should be reminded that they are strong enough and smart enough to make decisions that allow for career and educational opportunities while still giving their babies a chance at life," she wrote.

On Fox News on Thursday, Palin said, "For NOW to have chosen this... to come across sounding quite offended by hearing that a pro-life commercial will air on the Super Bowl day, it's baffling."

In a statement, NOW President Terry O'Neill said said, "The goal of the Focus on the Family ad is not to empower women. It's to create a climate in which Roe v. Wade can be overturned," Politico reports. "Focus on the Family has cynically set it up so they can say anyone who disagrees with airing this ad is disrespecting one woman and her choice. NOW respects every woman's right to plan her own family and insists our laws do the same."

Other reproductive rights groups are also continuing to push against the ad. The Center for Reproductive Rights sent CBS a letter urging the network to reconsider running the ad because it may violate CBS standards with respect to accuracy.