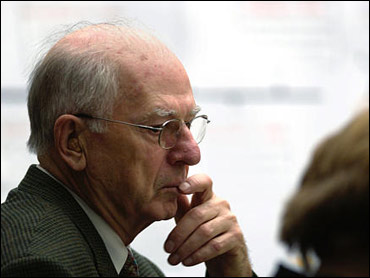 Defrocked priest Paul Shanley, the most notorious figure in the sex scandal that rocked the Boston Archdiocese, was convicted Monday of raping and fondling a boy at his Roman Catholic church during the 1980s.

The conviction on all four charges gives prosecutors a high-profile victory in their effort to bring pedophile priests to justice for decades of abuse at parishes around the country.

Shanley, 74, could get life in prison for two counts each of child rape and indecent assault and battery on a child when he is sentenced Feb. 15. His bail was revoked and he was immediately led off to jail.

CBS News Legal Analyst Andrew Cohen said the verdict shouldn't come as a surprise to anyone following the case, and neither should a life sentence should it be handed down.

"This is not a surprise verdict and there is no mystery as to why it happened," Cohen said. "The jury believed the victim, who testified in great detail and with heart-wrenching emotion."

The victim, now 27, put his head down and sobbed as the verdicts were announced after a trial that turned on the reliability of what he claimed were recovered memories of the long-ago abuse. Shanley showed no emotion as he stood next to his attorneys.

"There are no winners today. There are only losers," his niece, Teresa Shanley, said as her uncle was led from the courtroom. "We're no closer to finding out the truth about this scandal or finding out what happened."

During the trial, the accuser broke down on the stand as he testified in graphic detail that Shanley pulled him out of Sunday morning catechism classes and raped and groped him in the church bathroom, the rectory, the confessional and the pews starting when he was 6.

"It felt awful," he testified. "He told me nobody would ever believe me if I told anybody."

The accuser said he repressed his memories of the abuse but that they came flooding back three years ago, triggered by news coverage of the scandal that began in Boston and soon engulfed the church worldwide.

Shanley, once a long-haired, jeans-wearing "street priest" who worked with Boston's troubled youth, sat stoically for most of the trial, listening to his accuser's testimony with the help of a hearing aid.

The defense called just one witness — a psychologist who said that so-called recovered memories can be false, even if the accuser ardently believes they are true. A lawyer for Shanley argued that the accuser was either mistaken or concocted the story with the help of personal injury lawyers to cash in on a multimillion-dollar settlement resulting from the sex scandal.

The accuser, now a firefighter in suburban Boston, was one of at least two dozen men who claimed they had been molested by Shanley. The archdiocese's own personnel records showed that church officials knew Shanley publicly advocated sex between men and boys, yet continued to transfer him from parish to parish.

Prosecutors said the accuser had no financial motivation in accusing Shanley of rape in the criminal case because he received his $500,000 (euro389,287) settlement with the archdiocese nearly a year ago. They also cited his three days on stand, during which he sobbed and begged the judge not to force him to continue testifying.

"The emotions were raw. They were real," prosecutor Lynn Rooney said in closing arguments.

Now, as Cohen predicts, the emphasis in the issue of church abuse will shift to other cases.

"The question now is whether this verdict encourages other victims to come forward and similar cases to proceed to trial," Cohen said. "And I don't think anyone yet knows the answer to that question."

Victims' advocates said they were gratified by the verdict.

"This shows that when survivors find the strength to speak up, sometimes, sometimes, kids are protected, and justice can happen," said David Clohessy, the national director of the Survivors Network of Those Abuse by Priests. "When survivors stay silent, nothing changes."

Shanley is one of the few priests prosecutors have been able to charge. Most of the priests accused of wrongdong avoided prosecution because the statute of liminations on their alleged crimes ran out long ago. But the clock stopped when Shanley moved out of Massachusetts.

He was arrested in California at the height of the scandal in May 2002, and brought back to Massachusetts in handcuffs — charged with raping four boys from his parish in Newton, outside Boston. All four claimed they repressed memories of the abuse, then recovered them when the scandal broke.

But the case ran into numerous problems. In July, prosecutors dropped two of the accusers in what they said was a move to strengthen their case. Then, on the day jury selection began, they dropped a third accuser because they were unable to find him after a traumatic experience on the witness stand at a hearing last fall.

The clergy abuse scandal in Boston began in early 2002 when Cardinal Bernard Law acknowledged he shuffled a pedophile priest from parish to parish despite evidence the priest had molested children. That priest, John Geoghan, was convicted of assault and was later killed in prison.

The scandal intensified later in 2002 when the church released Shanley's 800-page personnel file. Despite church teachings, he argued for acceptance of homosexuality and pushed for gay rights. He called himself a "sexual expert" and advertised his counseling services in the alternative press.

He resigned from parish work in 1989 and moved to California. At the time, Law, who resigned as archbishop in December 2002 at the height of the scandal, praised his "impressive record." Boston church officials recommended him for a job in the Diocese of San Bernardino as a priest in "good standing."