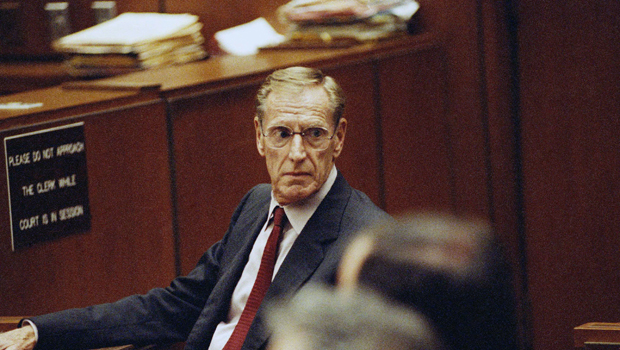 PHOENIX - Charles H. Keating Jr., the notorious financier who served prison time and was disgraced for his role in the costliest savings and loan failure of the 1980s, has died. He was 90.

A person with direct knowledge of the death confirmed on Tuesday that Keating had died but didn't provide further details. The person wasn't authorized to release the information and spoke on condition of anonymity.

When Keating's Phoenix-based home construction company, American Continental Corp., bought Lincoln Savings & Loan in 1984, the multimillionaire elevated its worth from $1.1 billion to $5.5 billion in a four-year period.

The thrift's collapse cost taxpayers $2.6 billion and tarnished the reputations of five senators who became known as the "Keating Five." One of them was Republican Sen. John McCain of Arizona, and the scandal re-entered the spotlight during the 2008 presidential campaign.

As the public heard testimony of elderly bondholders who had lost their life savings, Keating became a national poster boy for corporate greed. Keating was convicted in both state and federal court, but the convictions were thrown out and he agreed to a federal plea deal that freed him after nearly five years in prison.

Though Keating insisted he was a symbol of the common man, he was known more for an extravagant lifestyle. Keating received $19.4 million in salary, stock purchases and other compensation over five years, ending in 1988. His company provided luxuries like the use of a $5 million refurbished Florida estate. The corporation picked up the tab for lavish events like a 1986 Christmas party at which nearly $2,000 was spent on Silly String alone.

As the savings and loan institution's profits rose, the Federal Home Loan Bank in San Francisco began looking into investment activity in 1986. The examination was the beginning of numerous conflicts between Keating and federal regulators.

Through a tax-sharing agreement, American Continental was then able to siphon off $94 million of federally insured deposits in the form of deferred taxes never actually paid to the Internal Revenue Service.

The financial fallout triggered investigations and multiple lawsuits from all sides.

Keating filed a lawsuit, accusing the government of illegal seizure. In turn, the government slapped Keating, as well as several family members and associates, with a $1.1 billion fraud and racketeering civil lawsuit.

Several of the 23,000 investors who purchased junk bonds also filed a suit against Keating.

In 1991, the Senate Ethics Committee formally reprimanded Cranston for "improper and repugnant" dealings with Keating. DeConcini and Riegle received rebukes from the committee but no further punishment for creating the appearance of impropriety. Glenn and McCain were criticized less severely; the panel said they "exercised poor judgment."

McCain later called his involvement with Keating "the worst mistake of my life" and said having his honor questioned was in some ways worse than the torture he endured in Vietnam. During the 2008 presidential campaign, then-Sen. Barack Obama revisited McCain's role in the scandal in a campaign Web video.

Throughout Keating's 1991 trial in California on state securities fraud charges, he stuck to his claim that he was an innocent target of a power-hungry federal government.

The four-month trial ended with a jury finding Keating guilty of 17 of 18 charges. Two years later, Keating and his son, Charles Keating III, were convicted of multiple federal charges of racketeering, fraud, conspiracy and transporting stolen property. He started serving a 12-year federal and 10-year state prison sentence concurrently in 1993.

In all, Keating served nearly five years in prison. His state convictions were overturned a second time in 1998 when a federal court judge ruled the trial judge, Lance Ito, had not properly instructed the jury.

That same year, an appeals court judge threw out Keating's federal securities charges. The judge said jurors had improperly learned of his state convictions. Keating then made a plea deal with federal prosecutors, pleading guilty to three counts of wire fraud and one count of bankruptcy fraud in exchange for time served, with no fines or restitution. Charges were also dismissed against his son.

State prosecutors decided in 2000 not to retry Keating.

Post-prison, Keating moved into his daughter's home in the wealthy Phoenix enclave of Paradise Valley. In 2006, he quietly began work as a business consultant in Phoenix.

Born in 1923, in Cincinnati, Ohio, Keating had a middle class upbringing as the son of Charles Sr., a dairy company worker, and Adele, a homemaker. His family had financial difficulties when the senior Keating was diagnosed with Parkinson's disease.

Educated in Roman Catholic schools, Keating studied business at the University of Cincinnati. After the first quarter, he enlisted in the Naval Air Corps and trained to fly in combat. Keating was honorably discharged in 1945.

He later returned to the university, where he achieved an NCAA gold medal in swimming. Keating then attended law school and joined a law firm in 1947.

He is survived by wife Mary Elaine, daughter Mary, son Charles and grandson Gary Hall Jr., who was an Olympic swimming champion.