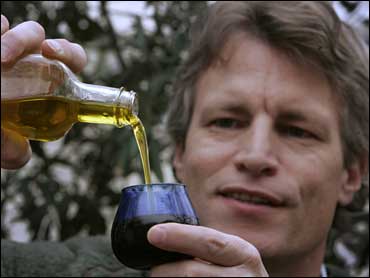 More than two-thirds of imported extra-virgin olive oil and one-in-10 made in California fail to meet international and U.S. standards, according to a report by researchers at the University of California, Davis.

Extra-virgin olive oil is a top-grade product that sometimes costs twice as much as regular or extra-light olive oil. But researchers at the UC Davis Olive Center found many brands don't live up to the label.

The report said 69 percent of imported oils sampled and 10 percent of California-produced oils failed the test.

The findings come as the USDA is formulating new standards for grades of olive oil to regulate a business that has drawn concerns over labeling accuracy.

What makes olive oil "extra-virgin" is a cold-processing method that prevents aroma from degrading, which led the International Olive Council and the United States Department of Agriculture to establish a sensory standard: it must have "excellent flavor and odor" and contain no more than 0.8 grams of free fatty acid per 100 grams.

But according to a L.A. Times report, Bob Bauer, president of the North American Olive Oil Association, said he was skeptical of the results. "He pointed out that funding for the research - $125,000 so far - was provided by three of California's largest olive oil producers and the California Olive Oil Council," the article said.

But L.A. Times also pointed out that Bauer's group represents most of the companies that import olive oil into the U.S.