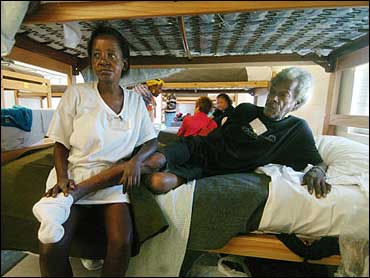 
If God works in mysterious ways, so do those organizing the Katrina evacuation. They have sent some 600 African-American Baptists to a state that is overwhelmingly white and Mormon. The evacuees who ended up at Camp Williams, Utah, near Salt Lake City, weren't even told where they were going until their plane took off.

When I visited Camp Williams, I thought I might find many evacuees distressed at being taken so far from home to a place so different in everything from culture and religion to climate and geography. What I found however were many Southerners who seemed surprisingly ready to make Utah their new home.

Thirty-nine-year-old Charles Burnett from New Orleans had never seen mountains before. He looked toward the Wasatch range, glowing red in the sunset, and said he had already decided to stay. "The hospitality here has been just overwhelming," he said.

Outside the evacuees' dormitory I saw Chinita Chairs, an African-American mother of three being embraced by Debbie MacKay, a white mother of six from suburban Salt Lake City. Debbie, a Mormon, was delivering a trailer full of diapers, cribs, clothing and toiletries collected by her church. "We need more African Americans in Utah," she said. "We're gonna make history," said Chinita.

But making history is certain to mean a big dose of culture shock. France Davis, the African-American Pastor of Calvary Baptist Church, has been in Salt Lake City for 34 years. He says it takes strength and self-confidence to live in a state where African-Americans make up less than 1 percent of the population. But Davis says that can also be an advantage. In the South, he says "you'd be one of many, but here, because of the small number, you can shine."

And many of the evacuees seem ready to try to shine in this place that is so different. Looking toward the mountains from Camp Williams, Tahira Lee from New Orleans says with a big, determined smile: "Utah, here I am."