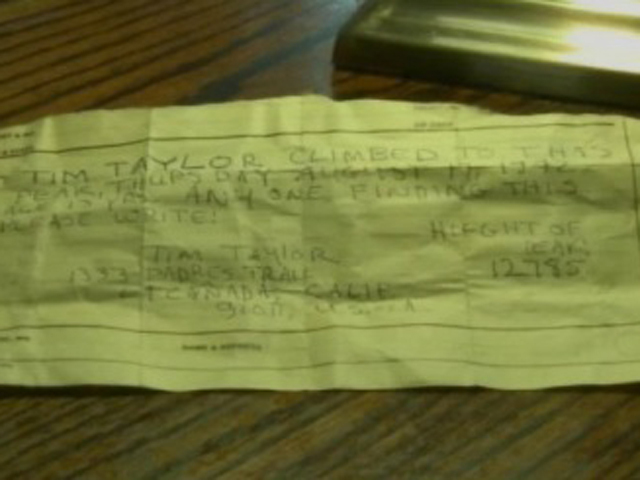 A hiker who was visiting the high Sierra with his grandson recently discovered a canister that contained a note written by a 13-year-old in 1972. It turns out the note was written by Tim Taylor, who is currently a judge who lives in San Diego, CBS Los Angeles reported.

The note in the canister was found by Larry Wright in September when he was hiking with his 14-year-old grandson in the vicinity. It read: "Tim Taylor climbed to this peak, Thursday, August 17, 1972. Age 13 yrs. Anyone finding this note please write."

"I thought it would be interesting to write to him to see if we could contact him, and let him know that we found the note, just like he asked," Wright told CBS2.

The message also contained an address on Padres Trail in La Canada Flintridge. The present homeowner at that location, Koichi Uyemura, he recognized the name as being a Tim Taylor who had lived in the home previously.

CBS2 News was able to track down Taylor, who is now a Superior Court judge in San Diego and married with children. He recalled leaving the note while on a Boy Scout trip. "Maybe I was born with a little sense of history and decided to try and make some," said Taylor via Skype. "I wanted to leave evidence that I had been there. And lo and behold, 40 years later, that came to pass."

"The fact that he left a note doesn't surprise me," said Greg Lee, a friend of Taylor. "The fact that somebody's found it 40 years later, yeah, absolutely, that is pretty wild."