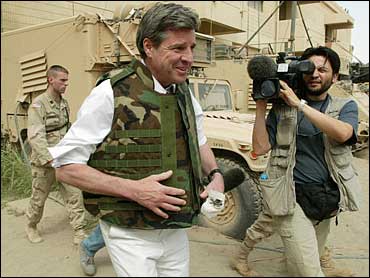 The new top U.S. official in Iraq met for the first time Friday with the seven political leaders likely to form the core of a new government and said he found common ground on the way forward.

L. Paul Bremer, the U.S. civilian administrator, said they agreed on three priorities: restoring security, building democracy and rooting out the remnants of Saddam Hussein's Baath Party. "It was a frank, open exchange - a very friendly and long discussion," he said.

But The New York Times is reporting in its Saturday editions that the United States and Britain have indefinitely put off their plan to allow Iraqi opposition forces to form a national assembly and an interim government by the end of the month. The Times calls the decision "an abrupt reversal."

Instead, says the Times, top American and British diplomats leading reconstruction efforts in Iraq told exile leaders during the meeting that allied officials would remain in charge of Iraq for an indefinite period.

Bremer, who was accompanied by John Sawers, a British diplomat representing Prime Minister Tony Blair, told the Iraqi political figures at the meeting that the allies preferred to revert to the concept of creating an "interim authority" — not a provisional government — so that Iraqis could assist them by creating a constitution for Iraq, revamping the educational system and devising a plan for future democratic elections, the Times reports.

One Iraqi who attended the meeting is cited by the Times as saying Iraqi opposition leaders expressed strong disappointment over the reversal.

Yet Massoud Barzani, head of the Kurdistan Democratic Party, told The Associated Press that the views of U.S. and Iraqi leaders at the session were "very close to each other, and in some cases they are identical."