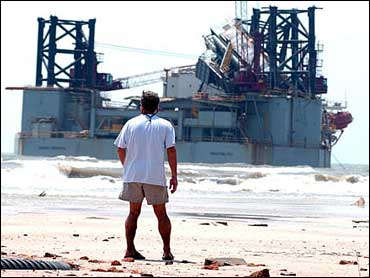 It has been a common talking point among advocates of increasing offshore oil drilling that Hurricanes Katrina and Rita caused no environmental damage when they decimated the oil infrastructure in the Gulf of Mexico in 2005.

This is aimed at assuaging the fears of many who believe opening up additional tracts of offshore areas to oil exploration will pose hazards to the environment and to tourism.

Ever since President Bush and Sen. John McCain announced last month that they would support expanding drilling beyond currently-allowed offshore leases (and Mr. Bush even signed an executive order allowing it), officials and pundits have continually put forth a dramatic talking point in the media about the safety of offshore drilling, even in the midst of a natural disaster.

As former Sen. Trent Lott told MSNBC on Tuesday, "We didn't have one drop of oil spilt when we had the biggest hurricane in, you know, recent history, Hurricane Katrina."

Former Gov. Mike Huckabee, R-Ark., also told Fox News on June 27, "When Katrina, a Cat-5 hurricane, hit the Gulf Coast, not one drop of oil was spilled off of those rigs out in the Gulf of Mexico. So we know that the technology to drill offshore is extraordinarily safe and environmentally friendly. And it's not something that we have to be as worried about as we do a refinery on shore or some other type of issue."

Newspaper columnists and editorial boards also jumped on the "not one drop" bandwagon. The Wall Street Journal published an editorial on June 12 saying, "Hurricanes Katrina and Rita flattened terminals across the Gulf of Mexico but didn't cause a single oil spill."

Meanwhile, on Monday Nancy Pfotenhauer, an energy lobbyist and senior energy adviser to McCain, said on MSNBC, "We withstood Hurricanes Rita and Katrina, and we didn't spill a drop."

And the Washington Post on Monday quoted Sen. Mitch McConnell, R-Ky., as saying, "I think people are reassured that not a drop of oil was spilled during Katrina or Rita. Those rigs in the Gulf, there was not a single incident of spillage that anyone reported."

Others have used slightly hedged terms, such as Gov. Bobby Jindal, R-La., who told Fox News on June 26, "That's one of the great unwritten success stories, after Katrina and Rita, these awful storms - no major spills." And Interior Secretary Dirk Kempthorne told the Fox Business Channel, "When Katrina and Rita hit the Gulf Coast where we have about 4,000 oil and gas platforms … we had no significant oil spill." (July 15)

Gee, if so many people believe it, it must be true - except it isn't.

In May 2006, the U.S. Minerals Management Service (MMS) issued a report stating that as a result of both Hurricanes Katrina and Rita, the number of pipelines damaged was 457, and the number of offshore platforms destroyed was 113, with a total of 146 oil spills recorded.

A study of environmental impacts written for MMS by Det Norske Veritas and Company (archive.org link) and published March 22, 2007 told an even more detailed story.

As a result of both storms, a total volume of 17,652 barrels (or roughly three-quarters of a million gallons) of total petroleum products, of which 13,137 barrels were crude oil and condensate, was spilled from platforms, rigs and pipelines. 4,514 barrels were refined products from platforms and rigs.

There were 542 reports related to offshore pipelines that were damaged or displaced, of which 72 resulted in spills that had a volume of one barrel or more of crude oil or condensate. These pipelines were reported to be dented, kinked, pulled up, twisted or bent, pinhole or valve leaks or other damages.

The 72 pipeline spills were accountable for about 7,300 barrels of crude oil and condensate spilled into the Gulf.

The report noted that response and recovery efforts kept the environmental impacts to a minimum, with no onshore impacts from these specific spill events.

However, MMS also noted that an estimated 8 million gallons (or 191,000 barrels) of oil was spilled from nine onshore facilities in the Louisiana Delta, where large holding tanks were breached by Katrina.

The graphic below shows all 542 pipeline damages reported for both Hurricanes Katrina (299 reports) and Rita (243). Damaged pipelines are in red; undamaged active pipelines are shown in gray. Pipeline breaks accounted for approximately half of the more than 17,000 barrels of oil leaked into the Gulf.

Is Louisiana ready for another hurricane?
More
Thanks for reading CBS NEWS.
Create your free account or log in
for more features.
View CBS News In
CBS News App Open
Chrome Safari Continue
Be the first to know
Get browser notifications for breaking news, live events, and exclusive reporting.