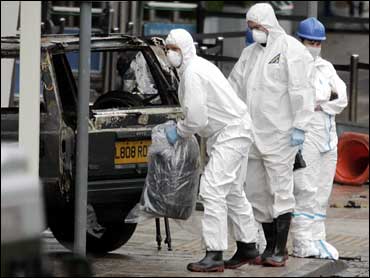 Imagine a plot device in a novel in which a terror attack is foiled because the car in which the bomb was placed was parked illegally and towed away. Would a publisher buy it? Maybe not. They would call it far-fetched, implausible, a little too cute. But sometimes the implausible happens. As Scott Macmann observed, "Truth makes better fiction."

There are several lessons to be learned from the failed terrorist attacks in Britain. Some are obvious, such as the fact that the terrorists are still a threat, the war is still on. Also that the terrorists are seeking softer targets, which speaks to the effectiveness of hardening others. The Glasgow airport attack in particular illustrates this — despairing of actually getting on an airplane, the bad guys just rammed the gate with a Jeep Cherokee with a bomb in the back. It was not a well-planned or thought-out attack; the vehicle was hung up on the static defenses, which worked as intended. And did one of the perps really as was reported pour gasoline directly on an open flame? No wonder he ignited. These are not superstars.

One should also credit the intangibles. It was fortunate one car was towed, and that both bombs failed to detonate when they were supposed to. Luck was aided by the sloppiness of the terrorists who parked the car illegally and manufactured the faulty bombs. Heroism was also a factor, in the bravery of the policeman who defused the bomb still on site. Those who think that terrorism can be countered with cookie-cutter precision should note well the role chance plays in almost every such operation.

Some alleged lessons should not be learned. For example newly appointed international security advisor Lord Stevens said that the techniques were "imported from Baghdad," since one of the alleged plotters (still at large) is an Iraqi. But surely car bombing is nothing new to London. The Israeli embassy in London was car-bombed on July 26, 1994. On June 25, 1992, the Provisional IRA used a car bomb near the London branch of the Chase Manhattan Bank. A car bomb was discovered near Harrods on December 17, 1983. The IRA frequently used car bombs in Northern Ireland, and an IRA splinter group car-bombed downtown Birmingham on November 2, 2001. The car bomb per se is not an Iraqi export.

What drew my attention was the intended set of targets in London, nightclubs and their patrons. This has been compared to the club bombings in Bali in 2002 and 2005, but the comparison is inexact. The Bali bombings were aimed at killing foreigners, and clubs happened to be where they congregated. An al Qaeda statement after the 2002 bombing stated that they were targeting "nightclubs and whorehouses in Indonesia" that are part of a "Jewish Crusader" alliance, and two of the bombers later stated that they sought vengeance for deaths of Muslims worldwide. But last week the targets were not foreigners clubbing in "Muslim lands"; they were young Londoners out having a good time. That alone was enough to condemn them in the eyes of the terrorists.

It is important to understand the contempt for life at the root of the jihadists; ideology. Simply enjoying oneself is a capital offense. This was illustrated in the planned attacks of the al Qaeda-connected "Crevice" gang. Five cell members were sentenced to life this April for plotting mass mayhem in London, in particular targeting nightclubs with fertilizer bombs. Surveillance audio captured one conversation on February 22, 2004 in which cell members Omar Khyam and Jawad Akbar discuss potential targets and methods.

JAWAD AKBAR: "You could get jobs like this, yeah, like for example the biggest nightclub in central London. Where now here, yeah, now no one can even turn around and say 'Oh they were innocent,' — those slags dancing around."

OMAR KHYAM: "If you got a job in a bar, yeah, or club, say the Ministry of Sound, what are you planning to do there then?"

Their target was "those slags dancing around." This tells us that their objectives are not simply political; they go much deeper than that. The jihad is not about Britain's Iraq policy, not some form of revenge for lack of economic opportunity, but is rooted in a basic rejection of the human spirit as expressed in any life-affirming activity.

This is a lineal extension of the beliefs of Sayyid Qutb, the Egyptian godfather of the contemporary jihadist movement. Qutb preached a form of radical asceticism which sought to negate most forms of earthly pleasure. He recorded his anti-fun epiphany in a 1951 book, "The America I Have Seen," an account of his experiences while earning a master's degree at the Colorado State College of Education, 1948-1950.

The scene was a church dance in the town Greely, Colorado, in 1949. Someone put on a recording of "Baby, It's Cold Outside," which had just hit the charts that year. As Qutb described it, "The dance hall convulsed to the tunes on the gramophone and was full of bounding feet and seductive legs ... Arms circled waists, lips met lips, chests met chests, and the atmosphere was full of passion."

Looks like everyone was having a great time. But, alas, not poor Sayyid, who already held his fellow students in contempt. The young men he considered sports-obsessed oafs. The women clearly intimidated him. "The American girl is well acquainted with her body's seductive capacity," he wrote. "She knows it lies in the face, and in expressive eyes, and thirsty lips. She knows seductiveness lies in the round breasts, the full buttocks, and in the shapely thighs, sleek legs — and she shows all this and does not hide it."

Sounds like he needed a date badly. But from this point on Qutb was at war with what he defined as immorality. His followers have sought to externalize his biases and impose a rigid code of behavior on any people unfortunate enough to come under their sway.

So from this sock hop we get a global ideological struggle with terrorist fanatics? Well, there is more to it, clearly. But when Qutb's ideological stepchildren seek to bomb nightclubs in London, when they assert that no one could believe that the "slags dancing around" could possibly be innocent victims, we see the same hatred, the same disdain, the same vision of a world in which enjoyment of any kind is by its nature sinful.

I was reminded of a story from Afghanistan in 2001. When the Taliban regime fell, a group of Northern Alliance fighters celebrated by playing music that previously had been banned. Some women soldiers began to dance. One of the younger men watched raptly, and then began to cry. He had never seen a woman dance before — he said it was the most beautiful thing he had ever witnessed. I thought then that this was a microcosm of the war and its meaning, the reason it was being fought and why it must be won. We see it again in London. This war is not simply a contest of grievances, or a difference of opinions, but a defense of the human spirit, of the right of people to express that spirit, to sing, to dance, to live.