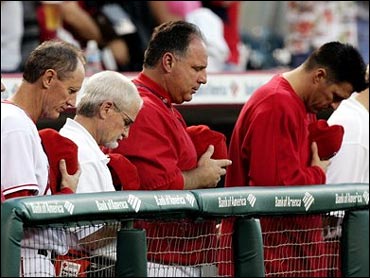 
Editorializing about Hurricane Katrina is surely a fool's errand. And that means I'm just the man for the job.

Of course some howlers in the winds of politics and culture war are trying to score political and rhetorical points on Katrina's back; we'll make fun of them later. At least Pat Robertson and Jerry Falwell haven't blamed American sin for the hurricane.

This event is frankly too big to have opinions about. All I can think to do is point to one of my all-time favorite college quotes: "Think of destiny," the Roman Emperor and stoic philosopher Marcus Aurelius wrote in the second century, "and how puny a part of it you are."

It's hard not to be reminded of our puniness in the face of what is sure to be the costliest natural disaster in American history. Most of us are just watching this tragedy and even that is hard.

It is emotionally hard to see so much destruction and so many lives lost and mangled. It is hard to even feel that you have a handle on what is going on, that you've seen the most important pictures and read the most important stories and understood the most important issues. It's hard to be helpless, though many have contributed money, time or expertise to relief efforts and many more will.

Those of us who edit CBSNews.com have found it difficult to tell all the stories and present all the pictures and information in ways that are clear and digestible. We have it far easier than our colleagues who have been sleeping on an abandoned New Orleans highway with little food, water or mean to communicate. And even they know they have homes to return to.

It's hard to feel that your empathy for so many people who have lost everything is adequate or appropriate. It's hard to conjure what it would be like to be in their shoes. It's hard to be puny in the face of destiny.

For all these reasons, we cope and comprehend Katrina with the tools at our disposal, with the bag of tricks we have. In the public arena, it means people, some people at least, argue. Partisans have been quick to knock President Bush for not canceling his vacation sooner or not going straight to New Orleans — somehow. The relief agencies, weather forecasters, television networks and New Orleans city planners will all come in for it soon enough.

I'm grateful to Rush Limbaugh for pointing out the most inane example of partisan hacking that I've seen. Writing on huffingtonpost.com, Robert F. Kennedy Jr. essentially blamed Katrina on Mississippi Republican Gov. Haley Barbour, who once lobbied against a treaty on global warming.

"Now we are all learning what it's like to reap the whirlwind of fossil fuel dependence which Barbour and his cronies have encouraged," Kennedy wrote. "Our destructive addiction has given us a catastrophic war in the Middle East and — now — Katrina is giving our nation a glimpse of the climate chaos we are bequeathing our children … Perhaps it was Barbour's memo that caused Katrina, at the last moment, to spare New Orleans and save its worst flailings for the Mississippi coast. [UPDATE: Alas, the reprieve for New Orleans was only temporary. But Haley Barbour still has much to answer for.]"

Limbaugh, in pointing out RFK Jr.'s remarks, naturally fought back, lampooning lefties using Katrina to promote environmentalism, de-evolution and flower power. On his radio show he said "… just the idea — that this disaster is looked upon as an opportunity for political gain by the left, and that particular political gain actually results in a decline of Western lifestyles, that's something that ought to sober everybody. I wouldn't be talking about this, I assure you, were it not for the fact that others on the left are out there making these asinine, ridiculous statements, and they have to be responded to and reacted to."

So this sort of lame argument is part of the mundane way the collective "we" make sense of disasters so huge. Socially useful, perhaps, but as I said, it makes editorializing a fool's errand.

My errand, though, is pretty simple. For various sad reasons, I have had to write an extraordinary number of condolence notes in recent weeks. This is one more.